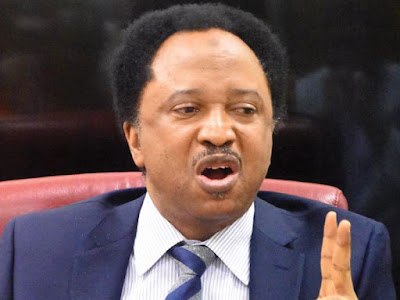 The $25,000 bribery allegation against a former Kaduna senator Shehu Sani by the Economic and Financial Crimes Commission (EFCC) took a new twist on Friday following the retrieval of 13 audio tapes of the chats between the embattled Senator and the Chairman of ASD Motors, Alhaji Sani Dauda.

The EFCC played some of the bribe chat tapes to Sen. Sani in the presence of his lawyers, Barrister Audu Mohammed Lawal, and Barrister Glory Peter.

According to a report by The Nation, the Senator admitted that the voice in the tapes was his but he alleged that some aspects of the recordings have been deleted.

It was the first time in four weeks that the EFCC had a breakthrough in the investigation of the Senator and it wasted no time in presenting its evidence to the suspect.


According to findings, the EFCC team met with Sani and his lawyers on Wednesday where the 13 audio tapes were made available to prove that there was a bribe deal.

But the session could only go through five tapes when Sani allegedly “recanted.”

A source said: “A conversation between Sani and the complainant has introduced another dimension to his claims. At a meeting that took place at the Jabi office of the Commission on Wednesday, Sen. Sani, who had hitherto denied receiving any bribe money from Alhaji Sani Dauda, Chairman of ASD Motors, recanted his words after listening to five of the 13 voice recordings of his conversation and that of the chairman of ASD Motors, Alhaji Sani Dauda.

“After listening to the first of the 13 audio recordings, the Senator reportedly said ‘Do you have another one?’

“When asked if he is familiar with the voices in the audio, he said: “Yes, that is my voice except that some aspects of the recording have been deleted”.

“Asked whether the EFCC or the complainant did the deletion, Sani said: “I am not saying you people deleted it. But that is not the complete conversation.”

The source gave further insights into what transpired at the session between the EFCC detectives, Sani and his lawyers.

The source added: “In the voice recording, Shehu Sani could be heard in Hausa language pleading with the complainant that he should do everything to make sure they resolve the issue because of their reputation.

“He was quoted as saying in one of the tapes as follows: ‘You have a family and I have a family; think of the way people will see the matter even though it is not public money’, he was alleged to have pleaded in Hausa.

“I believe you already discussed with Bashir; Bashir must have given you his personal advice on what we need to do so that this matter is buried here.’

In another instance, Senator Sani was said to also admitted that the money, $25,000, was “bribe money”.

The source said: “Contrary to Senator Sani’s public posturing of his innocence in the alleged crime, he reportedly begged profusely after listening to the recordings that the matter should not be taken further to the media.”

Responding to enquiries, the acting Head of Media, Tony Orilade, said: “All I can say is that the investigation of Senator Shehu Sani is ongoing and he would soon be charged to court.”

In a leak from his detention cell, the embattled Senator has insisted that he is innocent of the allegation of extortion of $25,000.

He said: “On his part, Sen. Sani said: ‘Alhaji Sani Dauda and his hidden sponsors have not been able to provide any proof of their allegations.

“I’m unjustly incarcerated on the ground of an arranged two-page petition backed with no evidential or documentary proof.

“The bribe story is a heap of blatant lies and outright falsehood concocted and fabricated, using a front and the EFCC to premiere a state drama.

“ASD is a barely educated front for a state mission. Criminalizing me, or “framing me”, will not silence me, bend me or compromise me.”

He said he had never met with the Chief Justice of Nigeria or any judge or judges directly or indirectly to offer any form of gratification from Alhaji Sani Dauda.

He added: “They claim extortion and here they are closing my bank accounts, searching my houses and offices and demanding I declare my assets of which I have already done that at the CCB last year when I left the Senate.

“The extortion allegation is nothing but a wholesale falsehood, packaged in a phantom anti-graft facade to taint, stain and mute me. That shall never happen if I am alive.”