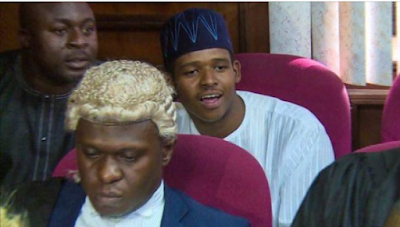 Mohammed Goji, an official of the Economic and Financial Crimes Commission (EFCC), says the anti-graft agency made a mistake in the bank account linked to Faisal Maina, son of Abdulrasheed Maina, former chairman of the Pension Reform Task Team (PRTT).

The official, who served as the second prosecution witness, admitted the mistake during cross-examination at the federal high court, Abuja, on Tuesday.

Goji, a member of the EFCC pension fraud team, had earlier narrated how a bank account and several properties were discovered in Faisal’s name.

He said the pension fraud team was set up in 2010 to conduct an investigation into pension accounts audit at the office of the head of civil service of the federation as well as the police.


But the EFCC official later admitted that the commission did not conduct an in-depth investigation into the PRTT.

While responding to questions from Adeola Adedipe, Faisal’s lawyer, Goji said it was a mistake on the part of the anti-graft agency to have written two different account numbers for one bank account in Exhibit B1 being used in evidence against Faisal.

“You are an experienced investigator? You have been in service for a long time right, and when you are taking a statement of a suspect, you will inform them of the reason they are under investigation?” Adedipe asked Goji.

“Yes I am an experienced investigator. I am doing my best My Lord. I have been an investigator for 14 years now. When recording statement of a suspect, we normally inform them of the reason they are under investigation,” Goji said.

The EFCC official acknowledged that as contained in count one of the charge, it was on the basis of the commission’s investigation that the charge bordering on the operation of account: 1018636805 (Alhaji Faisal Abdullahi Farms 2) in the commercial bank was preferred against the defendant.

“Will you be surprised that there is no such account in the bank?” Adedipe asked.

“I will be surprised if there is no such account with the name: Alhaji Faisa Abdullahi Farms 2 with the account number: 1018636805,” Goji said.

Adedipe then asked Goji that “do you agree with me that you lied to this honourable court?”

“It is not my intention to lie to this honourable court. It was a mistake My Lord,” Goje said.

Okon Abang, the presiding judge, adjourned the case till January 29 for the continuation of cross-examination.