Drama as fans question the validity of Chioma & Davido’s relationship 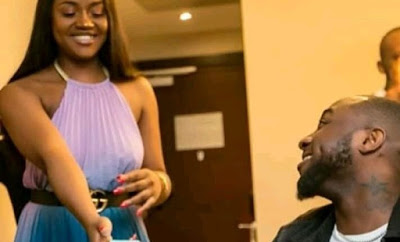 The last couple of days have been filled with drama and suspense between Davido and his 30 Billion Gang crooner Peruzzi. The Executive producer of Golden Boy Entertainment King Patrick called out the DMW boss for stealing his artist and not paying him royalties due after releasing Peruzzi’s recorded songs (Fia, Risky, Mind e.t.c) under DMW, which was previously recording under Golden Boy Entertainment.

Patrick went ahead to say Davido’s fiancee Chioma is Peruzzi’s side chic, and not her cousin as they both portrayed. There’s been a series of reactions on social media. Some even suggested that OBO confirm the paternity of his son Ifeanyi with Chefchi as she is fondly called and we have the exchange right here.


If you're feeling depressed, remember that you're not alone. God is with you always. Don't be afraid to reach out to people in your family, your church, or your friend circles.Ask them to pray with you and not give u drugs ! Hope u feel better bro 😂 Crackhead!
— Davido (@davido) January 17, 2020


If you're Feeling stupid and you're out there popping babies and giving girls STDs, don't be sad, reach out to loved ones and get advise from your Huncho on how to fuck his Side Chick and pimp her out to you as his cousin.. Let's be guided pls. Incest is a Sin.. 🐸
— King Patrick 👑 (@Kingpatrickgb) January 17, 2020


So Peruzzi wrote assurance for Chioma but Davido had to record it and use Peruzzi's babe as a vixen. Deep shii🤔🤔🤔
— BrezzIsLife (@jayythedope) January 18, 2020


Don’t be surprised when you see Patrick, Davido and Peruzzi cruising in months time.

Don’t be surprised when Davido & Chioma follows each other back and she features in his next music video.

This is all Marketing strategy and that thing works for him all the time.
— Duke of Ibadan 🀄️ (@AsiwajuLerry) January 18, 2020


Some people are just mad stalkers how will you wake up one morning,to go Davido IG account and check if he's still following Chioma


"I am looking for a sister.. Chioma my lover".. that line too deep make una ask peruzzi the meaning 😂. Person say the reason she dey smash peru peru nd all the froggies na because she don tire to lift Mr Froggy belle up to reveal en toothpick every time dem wan smash 😂😂😂😂😂 pic.twitter.com/xxnyTKtfMt
— Mrs 💛🌼 (@Simonia4wizman) January 18, 2020