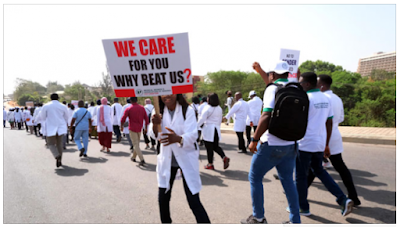 Some doctors in Abuja on Thursday protested the stripping of their female colleague by relatives of a patient who later died at Maitama General Hospital.

While embarking on their rally, the doctors held placards “We Care for You Why Beat Us’’, “Better Securities in our Hospitals’’, “Say No to Violence Against Health Workers” and “Doctors and Health Workers deserve Better’’ among others.

NAN gathered that the physicians marched to the office of Ramatu Aliyu, minister of state for FCT, where they complained about the rising incidence of violence against their members.

Addressing the protesters, the minister said measures were being put in place to would end all forms of assault against doctors.


“I appeal that you call off the strike and just give us the benefit of the doubt and see what will be done in the shortest time,” Aliyu said.

“I will come personally and talk to all hospitals in the FCT to know whatever challenges you are facing there. We appreciate your patience and understanding that you didn’t take laws into your hands and we assure you that the issue is receiving attention.

“Your demand is taken seriously and given the utmost attention. Violence is not acceptable whether on male or female at the FCT or anywhere else in the country.”

“It has been estimated that recently, no fewer than six health workers, especially doctors and nurses, have been assaulted by patient’s relatives in FCT hospitals,” he had said.

“The recent victim being a female doctor who was stripped naked by relatives of a patient, who died three days ago.”

He further elucidated that the attack was based on purported mismanagement of the patient, who was said to have died from a chronic medical condition.

“The perpetrators of this act had earlier threatened to kill the doctor for refusing to transfuse the patient with blood for which the doctor explained that it was not necessary,” he had said.

“The doctor had also explained to the relatives that blood transfusion could complicate the patient’s condition.”

He revealed that the perpetrators of the act were currently in detention at the Maitama Police Station, Abuja, and would be charged to court.