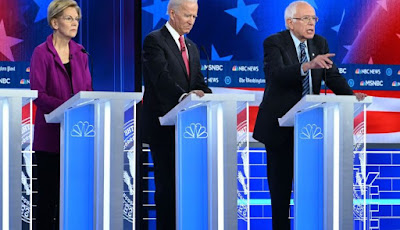 For the seventh time, Democratic presidential candidates mounted the debate stage Tuesday night in Iowa, for the final encounter ahead of the Iowa primary which holds in three weeks. Only six candidates participated in the debate.

In their opening remarks, the candidates explained why American voters should entrust them with the position of the Commander-in-Chief.


On her part, Senator Elizabeth Warren insisted that U.S. troops should not be made to be doing what they were not supposed to be doing, even as she also called for their withdrawal from the Middle East and other places.

Former Mayor Pete Buttigieg, said he was passionate about climate change, saying the issue should be given the urgency it deserved. This, he vowed to do, if elected President.

Senator Sanders denied a statement he was said to have made before Warren in 2018 that a woman could not win the presidential election. Senator Warren who refused to be drawn into the controversy, however stated that only a woman could defeat Trump. Sanders promised to support anyone who won the nomination.

Senator Amy Klobuchar said in her first hundred days in office as President, she would ensure that affordable medicines were brought into the U.S. to boost the healthcare which Sanders described as human right.

Billionaire Tom Steyer, surprisingly expressed his opposition to free tuition in colleges. He said the money that would be committed to such a project should be distributed to all to avoid leaving a legacy of burden for future generation. He said his funding of Trump’s impeachment campaign was standing up for what was right. He also promised to declare emergency on climate from his day one in office. He revealed that Trump would run his campaign on the economy, adding that as an international businessman, he was ready for him.

Senator Sanders defended his democratic socialism posturing which he said was about health care and living wages, insisting that was the way to defeat Trump.

Biden declared that he was ready to take on Trump on economy debate as well as take any dirts and darts that would be thrown at him, saying such attacks had made him stronger.

The candidates who were given one minute each to make their closing remarks, solicited supports from Iowa caucuses and vowed to defeat Trump at the polls if given the Democratic nomination at the end of the primaries.