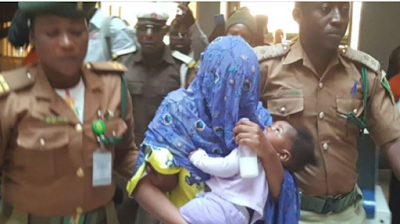 Some lawyers have spoken on the legal options available to Maryam Sanda, a woman found guilty of stabbing her husband to death with a kitchen knife.

The conviction has also brought to the fore the argument over the death penalty in Nigeria as punishment for capital offences such as murder, culpable homicide and kidnapping.

While many perceived the judgment of Justice Yusuf Halilu of the Federal Capital Territory High Court as ‘harsh’, others believe it is well deserved.

But the convict can still appeal her conviction, according to Nigeria’s constitution. This has raised the question of whether she will get a softer landing at appeal as well as the various options left for her lawyers to explore.

A number of lawyers who spoke with PremiumTimes  gave legal opinions on Mrs Sanda’s conviction and how she can get a lenient sentence if and when her lawyers appeal the judgment of the high court.

Mr Okafor said even though Ms Sanda has been condemned to death, her sentence is not automatic. “The FCT minister will have to sign her death warrant before she will be executed,” he noted.

Mr Okafor listed the options to include filing a notice of appeal and a motion for a stay of execution at the appeal court.

“By that, the convict has stayed her conviction at the high court pending the outcome of the appeal. In these circumstances, the accused can even seek bail but it can only be granted on the rarest occasion since her presumption of innocence has been lost because the court found her guilty of murder.”

Mr Akunne, a Lagos-based lawyer, said if the convict did not get a favourable judgment at the appellate court, ”she can still take the matter up to the Supreme Court.”

Ms Sanda’s sentence can be commuted from death to life imprisonment and perhaps, subsequently reduced to jail time if her lawyers present a strong appeal, according to Frank Tie-tie, a human rights lawyer.

“She can appeal at the court of appeal in the first instance, then to the Supreme Court and at these two levels, her sentence may be set aside and converted to life imprisonment. These courts have the power to say she is guilty of manslaughter and not culpable homicide.”

Mr Ogunye said if both courts still confirm the death sentence, the only remedy left is for her to explore the ”presidential prerogative of mercy”.

“The governors have the power to commute sentences or grant pardon to convicts. But since the crime was committed in the FCT, it is the president through the minister that can exercise the power of granting prerogative of mercy. So when she exhausts her appeal, they can now explore that.”

Meanwhile, Mr Ogunye also delved into why the judge gave the maximum punishment.

“The lady committed the act by using a knife to stab the husband and nobody is contesting that it was undiluted culpable homicide under our laws. The punishment for it is the death penalty and the judge did the right thing and was not swayed by sentiment in applying the law at the justice of the case required,” he said.

The lawyer argued that there could not have been any soft landing in Sanda’s case at the high court since there was “no plea for leniency or mercy that could have swayed the judge”.

Throughout her trial, Ms Sanda kept pleading not guilty to the crime, insisting that her husband died from a wound on the chest by a broken Shisha pot. “He pushed me and as I was falling down, I mistakenly broke his Shisha bottle and the water inside spilled on the floor,” she narrated to the court.

The accused said the deceased fell against the broken Shisha pot in an attempt to hold her down. “I saw a broken bottle pricked into his chest which I removed and covered the chest with a scarf.”

But Justice Halilu in his final judgment discredited the Shisha pot story, describing it as a “smokescreen hatched to mislead the court and cover the truth”.

The judge said the compelling versions of multiple prosecuting witnesses (PW) has proven that the Shisha pot was broken after the death of Bilyaminu.

Mr Ogunye said the judge had no option but to pronounce the death sentence on the accused “having found her guilty of culpable homicide.”

He said ”it is not the duty of the judge to determine the sentencing range since there is no option of statutory minimum or statutory maximum punishment.”

“Once its murder, armed robbery, treason or culpable homicide, it is death and that is what the law pronounced,” Mr Ogunye who described himself as an advocate of the death penalty said.

The lawyer argued that the murder was not premeditated as the judge pronounced, noting that there were mitigating factors that led to the commission of the crime.

“Her inability to control her mental faculties which were overwhelmed by having to stay in an abusive marriage is a very strong fact that can be considered”, he said, adding that the convict committed the crime in “hot blood.”

In her testimony before the court, Ms Sanda admitted that her two years of marriage with the victim, Bilyaminu Bello, the son of a former national chairman of the Peoples Democratic Party (PDP), Haliru Bello was fraught with quarrels.

The mother-of-two said trouble started on the ill-fated night after she discovered nude pictures of another woman in her late husband’s phone and confronted him before arguments which continued late into the night snowballed into a fight.

“Once you are able to show that it is infidelity or trap marriage which has led to built-up emotions that makes the person to lose her mental capacity, will that not be a mitigating factor?” Mr Tie-tie said.