4:18 AM CuteNaija 0 Latest News in Nigeria 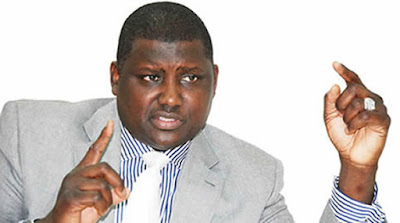 The Federal High Court in Abuja, on Tuesday, reduced the bail conditions it imposed on a former chairman of the defunct Pension Reform Task Team, Abdulrasheed Maina.

The bail is in respect of Maina’s ongoing trial on corruption charges.

Maina, along with his firm, Common Input Property and Investment Limited, is standing trial on charges of money laundering involving N2bn of pension funds.


Following his bail application, which was opposed by the EFCC, the judge had on November 26, 2019 granted him bail in the sum of N1bn.

But Justice Okon Abang on Tuesday reduced the sum from N1bn to N500m.

The judge made the reduction in a ruling on Maina’s application for a review of the bail conditions granted by the court on November 26, 2019.

Also on Tuesday, the court varied the aspect of the earlier ruling requiring the defendant to produce as sureties two serving senators who owned landed assets worth N500m each in the highbrow Asokoro or Maitama, Abuja.

With the court’s ruling on Tuesday, the defendant will now have to provide only one serving senator with property worth N500m in either Asokoro, Maitama, Wuse II, Central Business District or Katampe, Abuja.

Maina had, through his application filed on December 6, 2019 and argued by his lawyer, Mr Afam Osigwe, on January 13, 2020, urged the court to vary the aspects of the conditions requiring him to provide two senators with properties worth a total of N1bn in Asokoro or Maitama, Abuja.

Ruling on the application, Justice Abang held that although Maina did not provide sufficient materials to warrant varying the bail conditions, he only reluctantly granted the defendant’s request in view of his changed conduct.

The judge held that he took a risk by granting bail to Maina in view of defence counsel’s failure to challenge the part of the Economic and Financial Crimes Commission’s counter-affidavit that the defendant could easily jump bail.

The judge said Maina’s legal team failed to challenge the “weighty allegations” that he was no longer a resident of Nigeria and that he easily sneaked into Nigeria from Dubai, his alleged new place of resident, through the Republic of Niger.

He however ruled, “I have watched the defendant at recent proceedings. I can see that he is now calm and has not interrupted proceedings again, unlike when he was arraigned. Maybe because he has now realised that the court is here to do justice.

“I reluctantly grant the application varying the bail conditions in accordance with my powers under Section 6(6)(b) of the Constitution.”