Convince Offset to move to Nigeria with me- Cardi B 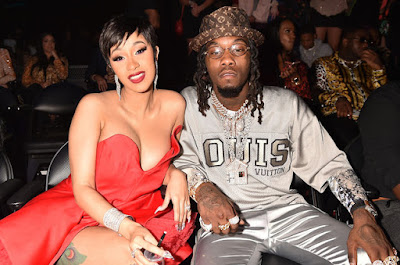 It is no longer news that American rapper, Cardi B wants to leave the United States of America for Nigeria, and she doesn’t want to go alone as she wants her husband, Offset to join her.

The outspoken rapper took to her Twitter page on Monday, January 6, 2020, where she shared a photo of her hubby, Offset dressed in the Nigerian traditional ‘Agbada’ (Photoshopped). She went on to caption the photo with a quote where she pleaded with fans to convince him to join her.

“Convince him to move with me,” she wrote.

Convince him to move with me pic.twitter.com/faeAVMHQBe

As expected, her fans in Nigeria have flooded the comment section of her Twitter page, trying to convince Offset to join her on the journey to her proposed new home, Nigeria.


Recall that a few days ago, Cardi B announced her plans to leave the United States of America after its president, Donald Trump approved the strike that killed the head of the Iranian Quds Force, Qassem Soleimani which has since gotten everyone worried about a possible World War III.