BREAKING: Another plane crashes in city centre in Iran (Video) 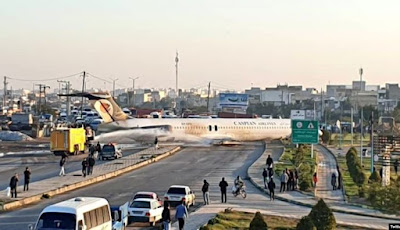 An airplane belonging to Caspian Airlines with 135 passengers on board skidded off the runway and crash landed in the middle of a street in Iran on Monday.

The incident that occurred in Mahshahr city, southwestern Khuzestan province, follows the shooting down of a Ukraine International Airlines flight on Iranian soil with 176 people on board.

No serious injuries were reported in the Monday incident; however, the downing of Ukraine International Airlines flight killed all the 176 people aboard.

The Monday incident took place at 7:50 a.m. local time, and preliminary report indicates that the crash was due to a technical problem in the aircraft’s landing gear.


Caspian Airlines had since confirmed the incident, saying it’s emergency response team, along with civil aviation experts, had been dispatched to site of the crash.

According Fars, a local news agency, the Caspian Airlines Flight 6936 departed from the capital city, Tehran and was set to land at Mahshahr Airport.

“The cause of the accident and the reason for the plane’s departure after landing on the runway are under investigation. Further details will be announced in the future. Fortunately, all passengers of the Tehran-Mahshahr flight are safe,” Jafarzadeh said.