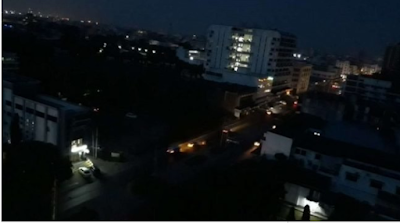 The national electricity grid collapsed twice in less than two hours on Thursday.

The system, which had collapsed around 12:37 on Thursday, resulting in power outage in some parts of the country, went down again around 2:15 pm.

Ikeja Electric (IE) confirmed the development in a tweet.

“Dear Customer, another system collapse was recorded at 14:15hrs today. Restoration efforts are ongoing. Kindly bear with us.”

“Dear Customer, the outage which occurred at 1237hrs is due to a TCN system collapse affecting Lekki, Ibeju & environs. The team is working to restore power. Please, bear with us.”

Dear Customer, present outage affecting all is a TCN System Disturbance on the grid. Power to be restored as soon as available. Please, bear with us
— Eko Electricity Distribution Company (@EKEDP) 16 January 2020


The grid collapsed more than 10 times in 2019, causing power failure across the country.

Responding to inquiry on the collapse, Ndidi Mbah, spokesperson of the Transmission Company of Nigeria (TCN), had attributed the incident to “some disturbances”.

“There was system disturbance which occurred at about 12.34pm this afternoon, affecting some parts of the country,” Mbah said.

“As at 1:10pm, supply was restored to Abuja and most parts of the affected areas.TCN is still working to completely restore and stabilise the nation’s grid.”