Atiku reacts to claims he is owing foreign workers of GOTEL 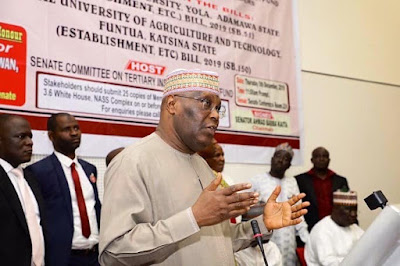 After days of silence, former Vice-President Atiku Abubakar has reacted to claims that he is owing some foreign workers recruited for his media company, GOTEL.

In a statement today, his media office rebutted the claim, saying “Nothing can be further from the truth”.

It emerged from the statement that money to pay the workers of Gotel, both local and foreign was given to their recruiter, John Chiahemen, a famous journalist, and that the matter had once been reported to the police. The statement claimed Chiahemen had since disappeared.

“For the avoidance of doubt, the funds dedicated to the payment of salaries of staff, both local and expatriates that were engaged by Chiamehen himself were made available to him. All those concerned are advised to contact Mr. Chiamehen accordingly”.

“To retool its operations, Gotel had in 2013 hired one Mr. John Chiahemen to lead the planning, design, build-out and rollout of TV Gotel Africa to be based in Abuja.

“To this end, Chiamehen was given a free hand by the founder and board of the company to run the affairs of Gotel.

“Requisite resources, as requested by Chiamehen were made available. On his own part, Chiamehen had committed to a revenue profile of N150 million, among others.

“But by 2016, there were concerns that the Chiamehen management was only long in promises and short in performance, prompting the then board to empanel an adhoc visitation committee to examine the state of the company. The findings of that committee were damning.

“Consequently, the committee recommended the need for a comprehensive audit of the company. The audit revealed serious fiduciary infractions by the Chiamehen led management.

“Further to the audit report, a board meeting was convened to consider the auditor’s report. However, before that meeting, Mr. John Chiamehen bolted and has refused to make himself available to account for the huge resources put in his charge.

“For the avoidance of doubt, the funds dedicated to the payment of salaries of staff, both local and expatriates that were engaged by Chiamehen himself were made available to him. All those concerned are advised to contact Mr. Chiamehen accordingly.

“On the 14th of December 2016, a formal petition on alleged breach of trust, fraud and misappropriation of funds against the former managing director/CEO was filed at the FCIID (Interpol) for investigation.

“Mr. Chiamehen is encouraged to make himself available to give account of all monies put in his charge during his tenure as MD/CEO of Gotel”.

The foreign workers who were recruited from CNN, NPR, CNBC and other reputable networks between 2014 and 2015 accused Abubakar, of breaching a year’s contract they had with GOTEL as consultants. They claimed they are owed several months of salaries, running into thousands of dollars.

Osodo in a demand notice sent to Atiku by the legal firm Olumide Aju, in 2017, demanded $38,100 as his outstanding salary. Atiku ignored the letter, according to reports.