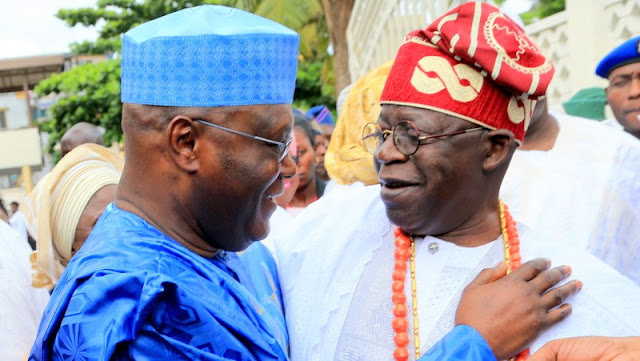 The 2019 presidential candidate of the Peoples Democratic Party, Atiku Abubakar; Vice-President, Prof. Yemi Osinbajo; the National Leader of the All Progressives Congress, Asiwaju Bola Tinubu; the Chief of Staff to the President, Major-General Muhammadu Buhari (retd.), Abba Kyari; and other political heavyweights met in Abuja on Saturday.


They were seen engaged in lively and cheerful discussions as they threw banters among themselves.

The gathering was at the Al-Nur Mosque in Abuja during the wedding fatiha of Ribadu’s son, Ismaila, and his now wife, Amina.

Atiku through his Media Adviser, Mr Paul Ibe, in an interview with our correspondent in Abuja said his meeting with Tinubu, Osinbajo, Kyari and other political stalwarts, many of whom are from the APC, had no political undertone.

He noted that political heavyweights across divides had also attended the wedding fatiha of his son, Mustapha, and his then bride, Afrah Mubarak El-Nafaty, at the Sultan Bello Mosque, Kaduna on December 14, 2019.

Ibe said, “When people are invited to a wedding fatiah, nobody should make undue interpretation beyond that, otherwise every other meeting at every other wedding or social event will be interpreted one way or the other.

This is the second time Atiku and Tinubu have met in public in Abuja after the Supreme Court’s judgment on October 30, 2019 upholding Buhari’s election.

Atiku had contested against Buhari, who was the APC’s presidential candidate.

Tinubu’s spokesman, Mr Tunde Rahman, had on his Facebook page shared a picture of the first meeting of Atiku and Tinubu at the Nnamdi Azikwe International Airport, Abuja on Saturday, December 14, 2019.

In one of the pictures, Atiku and Tinubu held each other’s hands, and were seen engrossed in a discussion while the Governor of Adamawa State, Ahmadu Fintiri, was seen listening to them with rapt attention.

Rahman had captioned the picture on his Facebook as, “Asiwaju Bola Tinubu and former Vice-President Atiku Abubakar exchanging views when they ran into each other at the Nnamdi Azikwe International Airport, Abuja.

“Tinubu was on his way to Minna, Niger State, to receive an honorary doctorate from the IBB University, Lapai, and the former VP, was going to Kaduna for a wedding. They were flanked by Adamawa State Governor Ahmadu Fintiri.”

Atiku was Vice President from 1999 to 2007 during the administration of former President Olusegun Obasanjo under the PDP. He later defected to the APC.

Atiku and the former Governor of Lagos State were in the same APC camp ahead of the 2015 presidential election which was won by Buhari. The ex-vice president was one of the party’s presidential aspirants who contested but lost to Buhari at the party’s primary held in Lagos.

The former vice-president after Buhari had won the election, went back to the PDP with some other prominent Nigerians including the then President of the Senate, Dr Bukola Saraki; the then Speaker of the House of Representatives, Yakubu Dogara; the Sokoto State Governor, Aminu Tambuwal, and a former Governor of Kano State, Senator Rabiu Kwankwaso.

Atiku through Ibe had also explained that his encounter with Tinubu at the Nnamdi Azikiwe International Airport was a chance meeting devoid of any political undertones.