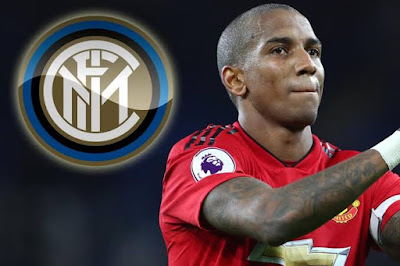 Ashley Young has completed his move from Manchester United to Inter Milan on a six-month deal, with an option to extend for a further year.

He says three things excited him as a Manchester United player.

He listed as unforgettable playing with legends, under greatest managers and being the captain of the club.

A deal between the two clubs was agreed on Thursday, with Inter paying a £1.3m (€1.5m) fee plus bonuses for the full-back. He becomes the third United player to sign for Antonio Conte’s Inter side in less than 12 months, following the transfers of Alexis Sanchez and Romelu Lukaku last summer, Skysports reports.


The 34-year-old rejected a contract extension at United after spending eight-and-a-half seasons at the club – with Young’s principle decision for departing Ole Gunnar Solskjaer’s squad being based on playing time.

Young posted on his social media, “To Man Utd, you gave me the chance to play with legends, to win trophies, to work under the greatest manager in history and to be your captain. Thank you for letting me be part of your story for eight-and-a-half years.

“To the United fans, every time I walked on the pitch wearing your shirt I gave you my all. Thank you for your support during the highs and the lows. I leave as one of you, see you again in an away end soon.”