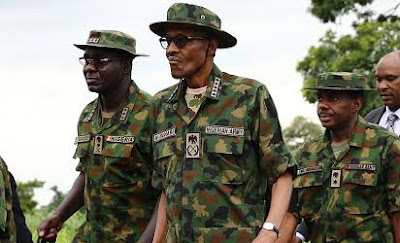 In commemoration of the 2020 Armed Forces Remembrance Day, some troops in the frontlines has penned an emotional letter to President Muhammadu Buhari, assuring him of victory over the already decimated Boko Haram terrorists.

In the mail signed by Adamu Abubakar and Moses Adebanjo (Staff Sergeant and Master Sergeant respectively), the soldiers said they are motivated by the president’s “undisguised passion, zeal and honest commitment to liberate Nigeria from the manacles of Boko Haram insurgency and its latter-day variant of Islamic State West African Province (ISWAP)”.

The troops in the frontlines were full of praises for the Chief of Army Staff (COAS), describing him as the “conqueror of terrorists” for leading the counter-insurgency crusade by himself.

The constant visits of Gen. Buratai to troops especially at special festivities, according to the soldiers, “massages their ego and strengthens our resolve to coast home with victory against terrorists”.


The group added that the COAS has relentlessly ensured that terrorists in whatever guise have been correspondingly dissolved by forces of the Nigerian state.

Unlike in time past, the troops revealed that the Nigerian Army has been transformed into a responsible and responsive military force, with sparkling shadows of global best practices and adequately armed with modern warfare instruments.

The troops, however, prayed for sustained efforts and upward review of their welfare package in order to fight the insurgents more ferociously.

The gallant soldiers, therefore, assured the president and Nigerians that the end is in sight for the Islamic sect as more than ever, they committed to ending the war.

We thank God Almighty for His infinite mercies that have transited us into Year 2020 gracefully. We specially felicitate and wish our President and Commander-In-Chief of the Armed Forces of Nigeria, President Muhammadu Buhari, GCFR an exciting and prosperous New Year.

Similarly, we identify with Mr. President on the unique occasion of the celebration of the Year 2020-Armed Forces Remembrance Day, which solemnity is embedded in the commemoration of our fallen heroes and heroines.

May the federation of Nigeria find peace and security for the ultimate price these gallant military personnel paid for our liberation; may their families find endless favours from Almighty God and may their souls be granted pardon and eternal rest.

Your Excellency, we are soldier of the Nigerian Army who have served our country for over 15 years and are currently at the frontlines in Nigeria’s Northeast. We were in the Army, when Boko Haram insurgency sprouted in 2009. And we have been actively involved in quenching the conflagrations of terrorists on Nigeria at different times and locations under various leaderships of the country till this moment.

But we are voicing out our feelings for the first time in this open letter. We dare say, we are motivated by your undisguised passion, zeal and honest commitment to liberate Nigeria from the manacles of Boko Haram insurgency and its latter-day variant of Islamic State West African Province (ISWAP).

We and millions of other Nigerians have observed over the years that you have provided purposeful and rewarding democratic leadership, not only to Nigerians; but has dispensed same to the Nigerian military, especially the Nigerian Army, which you anointed and mandated to terminate the reign of Boko Haram terrorism in Nigeria. We accepted the assignment with pride.

Under your leadership as the Commander-In-Chief of the Nigerian Armed Forces, insurgency has not sustained or developed its famed intractable horns or migrated from bad to worse. Your leadership has proved to Nigerians and the world that with the right political will and commitment, terrorism will be repressed and finally defeated in Nigeria.

Through our interactions with our colleagues on the frontlines, we are impressed by their unanimously confessed, and evidently positive testimonies of veneration, motivation and inspiration of our troops by Mr. President through the COAS and leader of the counter-insurgency operations, Lt. Gen. Tukur Yusufu Buratai, whom we fete as the conqueror of terrorists.

We shall be repeating the obvious, which probably must have come to your notice earlier through public testimonies. But permit us to emphasize that Mr. President’s unprecedented commitment to the welfare of Military personnel, especially Nigerian troops in the trenches and the replication of same by the COAS; the fraternal and indiscriminate inclination of Gen. Buratai in constant communion with troops have been the most potent weapons and tonic of troops in the voracious conquest of Boko Haram insurgents and the ISWAP elements.

And bolstered by you, the Army Chief has relentlessly ensured that terrorists in whatever guise who tormented Nigerians and dragged us into the Hobbesian levels of agonies, mindless violence, gruesome deaths, abductions, displacements of whole populations and destructions in connivance with non-state actors have been correspondingly dissolved by forces of the Nigerian state. Full sanity is being restored in our nation.

Furthermore, Your Excellency, Sir, your worthy vision of transforming the Nigerian Army into a responsible and responsive military force, with sparkling shadows of global best practices have seen to reforms and innovations which have elevated the performance status and rating of the Army as its endearing legacies.

The continuous acquisition of modern warfare instruments for the Army and the development of Army’s human resources base in science and technology are certitudes of reactivation of the collapsed foundation for a perfect Army in the nearest future, which only clairvoyants can sight or discern.

Our plea is that these efforts should be sustained and troops can be better equipped, in order to fight the insurgents more ferociously. We plead that whatever the country can do to help the Army with the necessary technologies in the meantime and for future use, should be done to speedily railroad the end of counter-insurgency operations in Nigeria.

Consequently Sir, we seize this unique privilege of interaction with you on the occasion of the Year 2020 Armed Forces Day to implore you to combine your military experiences and the prevailing circumstances to critically examine and consider the proposal/request by the Nigerian Army for an independent Army Aviation Wing. It is festooned on the premise that it would fasten the final termination of Boko Haram/ISWAP in Nigeria.

We passionately plead and may it be your considered opinion that the FGN under your direction should not hesitate to withhold any arsenal necessary to end terrorism in Nigeria. We need Army’s operation of its air power, to eliminate lacunas or delays in counter-insurgency operations when the need arises.

Sir, it may please you to note that this kind of technology is also used by the Armies of Asian tiger countries, in battling similar national security threats like terrorism. Nigerian Army requires its independent drones and weapons in the trenches that can be deployed at night at short notice, effortlessly and effectively.

With your kind support and foresight, the COAS, Gen. Buratai has laid a solid foundation for the Army’s airwing. The establishment of the Nigerian Army Aviation School and the Nigerian Army University, Biu (NAUB) are the COAS’s foresighted answers to the question of manpower that may arise for an Army air unit.

Therefore, we are always excited anytime your message of encouragement reaches us on the battlefield through the COAS. It is for us, messages of strength and inspiration which have always spurred troops to go the extra-mile in this unique assignment.

We are glad to inform you that your kind disposition and affection for us have been emulated and applied by the COAS.

The constant visits of Gen. Buratai to troops especially at special festivities such as Sallah and yuletide seasons massages our ego and strengthens our resolve to coast home with victory against terrorists.

Each time, we sight the COAS in midst of troops, we feel quite confident and convinced that troops are strongly and effervescently remembered by the Commander-In-Chief of Nigeria. And this simple, but worthy gesture unconsciously drags us into a stimulation to want to do more for Nigeria.

Your Excellency Sir, may we at the behest of troops thank you for the assurance that troops welfare will be further reviewed upwards again in Year 2020 as a source of morale boosting. We are not oblivious of the other special packages you have unveiled for troops and their families which are of immense benefits to them back home and relieved much burdens for us in the frontlines.

Our children now attend best Army schools in virtually all barracks, which are refurbished or renovated and equipped to taste with leaning materials by your administration. Our posterity has accessed this quality education at virtually no cost on our incomes. The multiple economic empowerment initiatives for spouses of Army personnel is another breathtaking burden you have lifted off our shoulders. We thank you tremendously.

May we assure you and Nigerians that troops of the Nigerian Army are in a hurry to return home from the warfront, but have vowed that until the terrorism war is totally won. We are confident to present the golden medal of defeat of Boko Haram insurgents and ISWAP elements to you in the nearest future.

My Commander-In-Chief, I have known you to be a listening leader for decades, right from your days as the Military Administrator of the defunct North Eastern State.

And by your open mindedness, there is no doubt that you will listen to everyone in the frontlines who has a message or suggestion to make to improve the Army. It is because you have remained an indisputable key component in the struggle for the liberation of Nigeria from terrorism, insurgencies and insurrections, as we are merely your foot soldiers.

We assure you by the prophetic voice of our colleagues that like others before us, we have chosen the patriotic duty to serve our country even at the cost of our lives. And so, in spite of our collective follies, artificial setbacks and difficulties, we are not undeterred and resolute to present to you the trophy of conquest of enemies of Nigeria.

Finally, Sir, we wish you a happy Armed Forces Day celebration; ditto for the esteemed members of the Nigerian Armed Forces; their families and the good people of Nigeria.