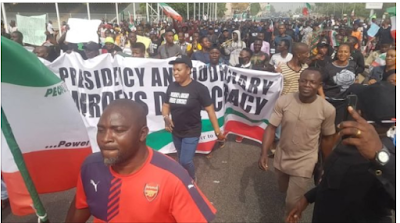 The All Progressives Congress (APC) says the Peoples Democratic Party (PDP) has become a threat to the peaceful coexistence of citizens in the country.

The ruling party said this in reaction to the protest embarked on by leaders of the PDP in Abuja on Monday.

Members of the opposition party took to the streets over the decision of the supreme court in the Imo state governorship case.

In a statement, Lanre Issa-Onilu, APC spokesman, said the action of PDP is “a calculated attempt to overheat the polity.”

“The disgraceful and senseless protest embarked upon by the opposition party is being done with the sole purpose of dragging the apex court of our land, and indeed our great country into odium and scorn before the international community,” Issa-Onilu said.

“We also view the irascible actions and irresponsible remarks by the PDP as a calculated attempt to overheat the polity. PDP has become a present threat to our peaceful coexistence.

“The crux of the decision was that the PDP candidate (who had been adjudged to have been wrongfully declared the winner by the Resident Electoral Commissioner of Imo State) was removed by the apex court and Sen. Hope Uzodinma of our party was declared the rightful winner of the election.

“The court directed the Independent National Electoral Commission to issue a Certificate of Return to Sen. Hope Uzodinma and that he should be sworn in as the Governor of imo state.

“This decision by the apex court was not made lightly but was, in fact, based on the facts presented by the parties and the law canvassed before it by their respective counsel. How else should a court of law determine a case before it? Based on innuendos, conjecture, suspicions and conspiracy theories? Certainly not.”

The APC spokesman asked security personnel to arrest anyone attempting to cause chaos in the country.