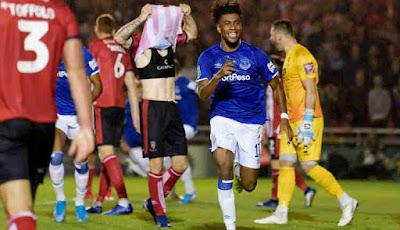 Everton manager Carlo Ancelotti said Alex Iwobi will resume group training next week and will not be available for their Premier League fixture Against West Ham United on Saturday.

The summer-signing suffered a hamstring injury during a league match against his former club, Arsenal on December 21 and he has missed their last five games.

Before the setback, Iwobi was a prominent player for the Toffees, starting 11 of his 16 league appearances with a goal to his name.

“Alex Iwobi will not be ready for the match. I think next week he will be able to train with us,” Ancelotti the club website.


Everton will be aiming for their fourth league win on the road this season when they visit David Moye’s West Ham at the London Stadium.