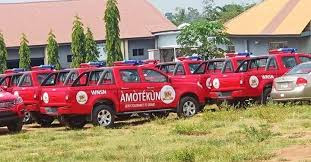 A Senior Advocate of Nigeria, Aare Afe Babalola, on Sunday said that any attempt by the Federal Government or its appendages to terminate the South Western Nigeria security outfits code-named ‘Operation Amotekun’ will fail.

The initiative, according to him, is deeply rooted in the 1999 constitution.

Babalola spoke on Sunday in Ado-Ekiti, the state capital, while criticising the APC-led federal government over its pronouncement through the office of the Attorney-General of the Federation and Minister of Justice, Abubakar Malami, that the joint security outfit is illegal.

Malami had last Tuesday announced the federal government’s opposition to the initiative, saying Amotekun was illegal and security was meant to be sole responsibility of the Federal Government.


The founder, Afe Babalola University, Ado-Ekiti argued that the southwest governors had not erred but only responded to the region yearnings for improved security.

He said this was necessary since the centralised police system had failed to ensure the safety of the life and property of their people.

He recalled that kidnapping, armed robbery, herdsmen/farmers clash and other security challenges prompted the formation of Amotekun as a regional response by the governors to clamp down on the heinous activities of security threats in the southwest.

The legal giant argued further that the governors had the right to protect their people because that was the ultimate responsibility of responsive government, saying Amotekun doesn’t only has its roots in the 1999 Constitution but other previous constitutions.

He said unfortunately Malami relished on the Article 45 second schedule of the 1999 constitution (amended), that gives to the FG the exclusive power to manage the police and forgot that sections 24, 40, 45 imposes clear responsibility on citizens to ensure security of their lives and property.

“The Amotekun outfit is a protective and supportive outfit established by the governors of the Southwest. It has its roots in the 1999 Constitution and the previous constitutions before it – 1960, 1963.

“Section 24 of the constitution provides that ‘it shall be the duty of every citizen to make positive and useful contribution to the advancement, progress and well-being of the community where he resides’. Well-being means security of life and property etc. How many Nigerians realise that they have a duty to assist and to protect the interest of the community and themselves.

“And Section 40 goes further that ‘every person shall be entitled to assemble freely and associate with other persons, and in particular, he may form or belong to any political party, trade union or any other association for the protection of his interests’.

“When you put these two together, it shows that all of us have the duty to associate whether as Yoruba people or as state people to ensure that lives and properties are safe. The Amotekun outfit has its roots in the constitution. It is constitutional, it is legal and proper,” he said.

According to him, the Federal Government should rather embrace and key into the initiative instead of trying to kill the laudable initiative, saying “it should immediately thank for what they are doing.

“If this outfit had been established about 10 years ago, we would not have these issues of kidnapping, killing and other security challenges.

“We won’t have those who go to the farms to kill people because they would be fished out. That is why the constitution says that such outfit should report to the police.

“What I have just said is that it is to support the police, support the government in their duty to ensure that there is peace, there is safety of property, safety of lives. It is a good idea. It is belated but it is lawful and constitutional.

“All that the AGF said is that Article 45 of the constitution, second schedule gives to the FG the exclusive power to manage the police, he did not say that sections 20, 40 and 45 are abrogated. They cannot abrogate it.

“The sections I have quoted are superior to the schedule he is talking about and in any event, the governors have not set up a parallel police outfit, what they have done is to set up a supportive and protective organ to assist the police and in their communiqué, they said it would report to the police.

“The law says you can join together in association to assist the police. How can the police or any government by angry about this.

“In my opinion, the act has been done, Amotekun had been launched, let them go on.

"What the state governors have done is legal, so why should they bother? Let them (FG) try to go to court.

“It is a case that must fail if they go to court. They have not set up a parallel police outfit. No. the constitution says it is your duty to protect the interest of yourself and others and join together in doing so. So simple. The case will be so easy to win,” Babalola argued.