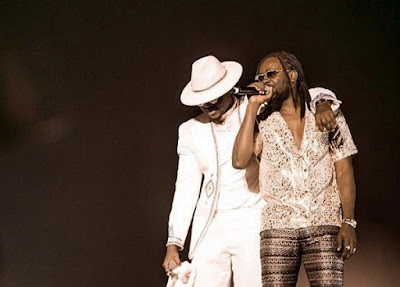 Afrofusion singer, Adekunle Gold has revealed that he would be collaborating with Kizz Daniel, on the song ‘Jore’

The gifted singer took to his Twitter page on Friday to inform his followers that the duo are working on what appeared to be his first project of the year.

“God Please, forgive @iamkizzdanieI and I for waiting this long to get on a song together. we have sinned against you,” he wrote.

In another tweet, he further released the title of the song and urged fans to anticipate it’s release.

Recall that Adekunle Gold recently celebrated his first wedding anniversary with Simi, his wife, who is also a singer.

The duo tied the knot on January 9, 2019 and made fans yearn for affection with their hypnotic romantic displays and collaborative tracks that both capture the moments of their wedding.
In June 2019, the singer announced the death of his dear father, Prince Hakeem Kosoko.

Kosoko reportedly died after a brief illness on 27th May 2019.

The ‘Orente’ crooner who confirmed the death in a statement obtained by newsmen, expressed sadness over his father’s demise.

In his words:“ I feel a great sense, of loss to officially announce that after we fought so hard, my father passed on the 27th of May, 2019.

“My father was a GREAT man. He has always been the man I’ve looked up to. Growing up, I watched him work so hard for so little. He was very honest and has never been interested in shortcuts.

“Hard work and integrity meant everything to him. My father. I will always remember, what he said in this statement: “I’ve been in service far too long to let quick money ruin my reputation”. This was my Father.

“He is forever to be remembered as a teacher. My teacher.We all know that teachers weren’t big earners but my dad would ensure we always had everything we ever needed.

“My Dad was so loving towards me. My father often wanted me to toughen up, it’s funny because he was the opposite tender and sentimental about me and my sisters.
“Sadly, I was not done making him proud, there are dreams I had with him in the picture, I don’t know guys, I really wasn’t done.

“ I find little solace in something I read today. “God knows how to write straight on crooked lines” This area is very crooked for me, these are depths of grief that I have never dived. But God…God will figure it out.

“ I thank you all for your prayers, your support, your kind words. None of them have gone unnoticed. I pray the love you’ve shown me will be accorded you in your time of need.

“To my Dad, the greatest man I will ever know in this life and the next, sun re o!Adieu papa. May your soul rest in perfect peace.”