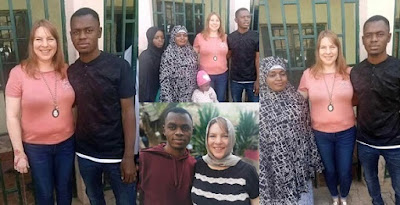 Jeanine Delsky, a 46-year-old woman from the United States, is set to tie the knot with Sulaiman Babayero Isa, a 23-year-old Nigerian, she met on social media last year.

According to Daily Nigerian, the mother of two touched down at the Mallam Aminu Kano International Airport last Saturday, from California, where she lives.

It was gathered that upon arrival, she headed to Panshekara, a suburb of Kano, where Isa’s parents live to finalise plans for the marriage and subsequently travel with him to settle down in the US.

The pair’s love journey was said to have started in 2019 when they both met on Instagram, after which they exchanged pictures and continued an online courtship that would eventually be resulting in a marriage.

Delsky stated her visit to Nigeria was due to her love for Isa, noting his sincerity made him more endearing to her than others she had met online.

She added they had agreed to depart Nigeria for US immediately to settle down after their marriage.

“He messaged me on Instagram saying Hi,” Delsky was quoted as telling Kano Focus.

“I didn’t respond because I have had experiences with Nigerian scammers.

“But there was a guy messaging me and Sulaiman knew he was a scammer so he said “get a job and quit scamming innocent people. So I thought he sounded like a nice guy.”

Relishing finally meeting his girlfriend, Isa, a barber and fresh secondary school graduate, restated his readiness to follow Delsky abroad to start a new family with the hope she would one day accept Islam.

He went on to dismiss the age difference between the two, stating “it’s even the Sunna of the Holy Prophet Muhammad, Peace be Upon Him, to marry a woman who is far older than you”.