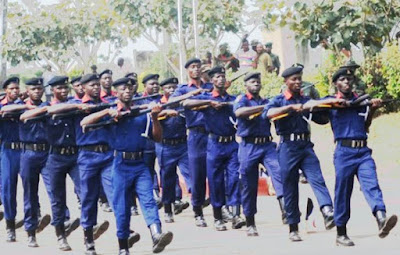 Apart from the general duty personnel, the CG has also ordered the deployment of sniffer dogs, specialised units such as the Special Forces, Counter-Terrorism, ambulances, and the Surveillance Teams which are expected to man strategic areas.

Gana made this known while felicitating with the Christian faithful over the birth of Christ.

The CG in a statement in Abuja on Friday by the Corps spokesman, Emmanuel Okeh. urged Christians to live exemplary lives.


It said, “For the purpose of effective and efficient deployment, the Corps’ Chief Executive has recalled all the senior officers on leave and pass to report for duty.

“He also directed the Zonal Commanders and state Commandants to ensure that there is no hitches during the festive period and beyond as he advised that there should be a watertight security arrangements in and around their jurisdictions most especially around churches, recreation centres, shopping centres, among others.”

Muhammadu further disclosed that ambulances would be stationed along the highways, airports and other designated areas for quick and timely response to emergency situations.

He stated that mobile surveillance vehicles would also be on duty to monitor the movement of those with sinister motives.

The CG urged the personnel to work in synergy with other sister agencies “as the Corps will not tolerate any form of sabotage and crisis over issues that could be avoided.”

Meanwhile, the Kogi State Commissioner of Police, Mr Akeem Busari, has announced the ban on firecrackers in the state.

In a statement in Lokoja on Friday, the command’s Public Relations Officer, William Aya, quoted Busari as saying that the ban on the use of firecrackers was due to the threat it posed to security of lives and property.

He admonished parents and guardians to restrain their children and wards from the use of the devices throughout the festive season.

“Anybody caught using the knockout will be arrested and prosecuted,” he warned.