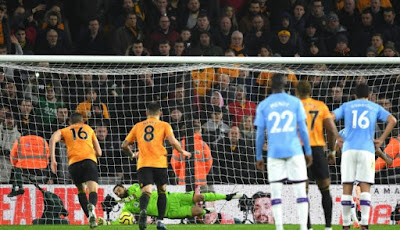 Wolverhampton Wanderers dealt another blow to defending champions Manchester City’s hope of catching up with Liverpool, when they defeated them 3-2 at Molineux Stadium Friday night.

Wolves came from behind to beat the defending champions, after City led with a brace by Raheem Sterling, despite their keeper Ederson being sent off in the 12th minute for fouling Diogo Jota right in the box. Referee Martin Atkinson did not hesitate to show Ederson the red card.

Despite being down to 10 men, City tried to take the game to Wolves defence and they were soon compensated with a penalty awarded them in the 25th minute, after Riyad Mahrez was brought down in the Wolves box. A VAR check endorsed the penalty, but Sterling not only took it twice, but scored on a rebound.

Sterling recorded a second goal, five minutes after resumption in the second half. But another five minuets after, Wolves revival began, first with a goal by Adama Traore.


Raul Jimenez added a second in the 82nd minute to level up and in the 89th minute, Matt Doherty found the winner, with an assist by Jimenez.

Wolves, who have completed the league double over Man City, move up to fifth with 30 points from 19 matches.

Pep Guardiola now agrees it is becoming difficult to catch up with Liverpool, who still have a game in hand.

Liverpool are now leading them by 14 points. Leicester trail Liverpool by 13 points.

“We have to think of the next game and about winning our games.”

Wolves, flying high in fifth place, have contributed to City’s downfall more than most and, after winning 2-0 at the Etihad Stadium in October, they celebrated a top-flight double over the Manchester club for the first time since 1960-61.

The only blemish for Wolves were the missiles thrown from the stands when City celebrated their second goal, an incident that prompted the Football Association to launch an investigation.