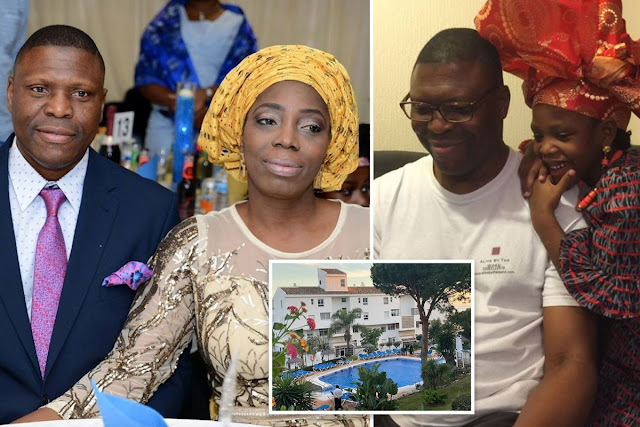 Fresh reports suggest that Mrs. Olubunmi Diya, the widow of the Redeemed Christian Church of God’s pastor who drowned alongside his two children while swimming in a Spanish hotel, may consider a legal action against the company.

The woman alleged there was “something wrong” with the pool they died in, adding that she had hired a lawyer.

Hotel operator CLC World Resorts and Hotels had said ‘diligent and exhaustive’ police investigations had confirmed the pool was working ‘normally’ and there was “no malfunction of any kind.”

Mrs Diya, however, disagreed, insisting there was something wrong with the swimming pool that made swimming difficult for them.

The ‘utterly heartbroken’ mother said she would miss her late husband and the two children.

She said earlier media reports claiming they couldn’t swim were incorrect. She said she believed something was wrong with the pool that must have made swimming difficult for them at that point in time.’

The operator of the Costa del Sol hotel, however, stated that her claims were “directly at odds with the findings of the police report” into the tragedy.

According to The Guardia Civil in Spain, its investigation points to the incident being an accident caused by the victims’ lack of swimming expertise when in the deep zone of the pool.

The statement read in part, “Our family is utterly heartbroken by the events of last Tuesday, but we are comforted and strengthened by our strong faith in our Lord Jesus Christ.

“We are deeply shocked, saddened and struggling to come to terms with their passing. They all brought joy and love to the world and to everyone that crossed their path. We love them all dearly, will always remember them in our hearts and miss them greatly.”

It added, “The whole family, all five of us went to the pool together and were all present when the incident occurred. The children were not left unattended.

“We followed the instructions displayed by the poolside at all times. The children went into the pool using the steps but found themselves dragged into the middle, which was deeper and called for help when they could not get out.

“My daughter did not fall into the water. My husband went in via the steps trying to help the two struggling while I ran to the nearby apartments shouting for help to assist my husband. By the time assistance came, the three of them were under the water.”

She added that investigations were ‘ongoing’ by Spanish police to determine what happened and claimed ‘no information has been passed to the family about their conclusions.

Hotel operator CLC World Resorts and Hotels said ‘diligent and exhaustive’ police investigations had confirmed the pool was working ‘normally’ and there was “no malfunction of any kind.”

The company added, “Our sympathies remain with the family at what we understand must be a stressful and desperately upsetting time for them.’ The Guardia Civil in Spain said: ‘The Civil Guard investigation, after carrying out different tests and taking statements from different people who were caught up in the Christmas Eve tragedy, points to a tragic accident which in principle was caused by the victims’ lack of swimming expertise.”