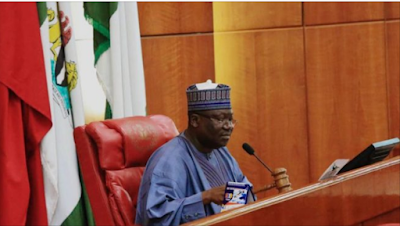 Lawan said this on Monday while speaking with journalists at a luncheon in Abuja. He spoke on the achievements of the ninth senate since its inception in June.

The loan request estimated at $29.960 billion was rejected by the senate in 2016 under the leadership of Bukola Saraki.

But the senate president said the request was rejected at the time because there were no details accompanying it, and that “the executive has learnt its lesson and the letter came with sufficient details”.

Lawan said when the request is approved, the senate will ensure that the funds are judiciously used for the proposed projects.

“The question of whether we will pass the loan request of the executive arm of government, Yes! If we don’t have money and you have projects that after you build them will not only provide infrastructure that you need but also spin money,” he said.

“But one thing is we are going to be critical that every cent that is borrowed is tied to a project. These are projects that will have spillover effects on the economy and we will undertake our oversight so well to ensure that such funds are properly, prudently, economically and transparently are applied on those projects.

“In 2016, the senate did not pass the loan request of the executive at that time and the reason was because there were no sufficient details.

“I want to inform this gathering and indeed Nigerians that the letter conveying the loan request of the executive came with every possible detail.”

Lawan said within six months, the senate has passed six bills four of which are of private members.

“Within the first six months of its inauguration, the ninth senate has passed six bills into law, four of them members’ bills. The first of these bills is the Deep Off-shore and Inland Basin Production Sharing Contracts Act CAP D3 LFN 2004 (Amendment Bill, 2019,” he said.

“The two executive bills that we passed are the appropriation bill, 2020 and the finance bill 2019.