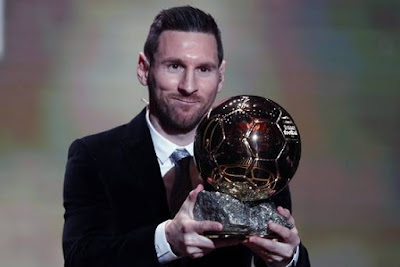 Barcelona superstar Lionel Messi won the 2019 Ballon d’Or award yesterday, for the world’s best male footballer for a record sixth time after an outstanding campaign with La Liga giants in the 2018/2019 season.

The 32-year-old Argentine scored 36 goals in 34 La Liga matches as Barcelona defended their title, while he managed a further 12 goals in just 10 Champions League appearances.

In total, Messi scored 56 goals in 60 appearances for club and country last season.

Messi beat his old foe Cristiano Ronaldo to the award – who won the Serie A title in his debut season with Juventus – as well as Liverpool’s Virgil van Dijk, who earlier this season won the Uefa Men’s Player of the Year.

Luka Modric missed out on a place on the 30-man shortlist this time around.

Liverpool’s Van Dijk who finished as runner up to Messi in balloting for the FIFA FIFPro Men’s Player of the Year, was hoping to become the first defender to win the Ballon d’Or since Fabio Cannavaro in 2006.

The Ballon d’Or makes it seven individual awards for Messi in the last seven months.