Why I prefer female president for Nigeria – Ooni 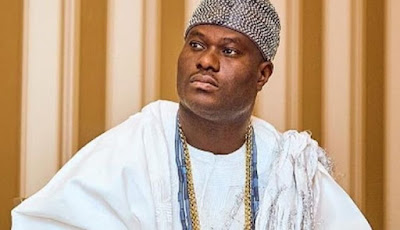 The Ooni of Ife, Oba Adeyeye Ogunwusi, has said that women can rise to be president of Nigeria because they have the strengths and potential of good leadership.

The Ooni spoke at the opening session of the second edition of “Queen Moremi, the Musical, Reloaded” late on Tuesday at the Lagos Continental Hotels.

According to him, we should try to uplift the position of women because they have a lot to offer the society.

He noted that there were lots of God-given talents in women, which were demonstrated through the heroic deeds of Queen Moremi Ajasoro (QMA) many years ago.


“We’ll keep telling the story of Queen Moremi Ajasoro to bring out the strengths, talents and powers of women and what they can offer to our society to make a difference.

” Our prayer is that someday, we will have a female president, probably, they may even do better.

“We had only struggled to have a female speaker but she could not scale through to the end so we need to support them to excel in future,” he said.

The Ojaja II also called on both government and private organisations to continue to support the cause of the girl-child to give them a sense of pride in the society.

“We’ll keep telling the story of Queen Moremi Ajasoro to focus on how the society can uplift the girl-child to have a sense of pride and occupy a place in the progress of the country in future,” he said.

The monarch also commended Olufunso Amosun, wife of the former Ogun State Governor, who he called “Queen Moremi of our time” for her support in promoting the female cause.

Also, Princess Ronke Ademiluyi, the cultural ambassador to QMA, told The News Agency of Nigeria (NAN) that the cultural show would last eight days from Dec. 24 to Jan. 2,2020.

Over 900 people graced the first day of the show. Apart from Olufunsho Amosun, there were also Princess Toyin Kolade, Nike Adedutan, wife of the FIrst Bank CEO and Mr Tonye Cole; the Chairman, Andron Homes.

Others were: the Olugbon of Orile Igbon, Oba Francis Alao and his wife, Mrs Bola Shagaya and Princess Kemi Adewumi.

According to myth, Queen Moremi Ajasoro demonstrated great courage and selflessness in the sacrifice she made to liberate the people of Ile Ife during her life time.