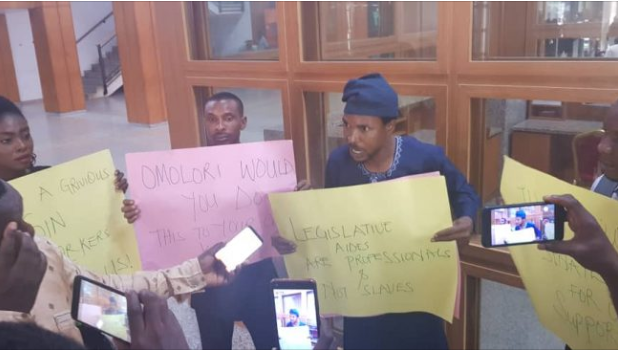 Some aides of lawmakers at the national assembly have protested the non-payment of their salaries and allowances by the institution’s management.

The protesters held up placards at the main lobby of the assembly which read: ”Omolori would you do this to your kids” and ”It is a grievous sin to rob workers of wages. Pay us!”

Speaking with journalists on Thursday, Lawson Oviasoje, an aide to a house of representatives member from Bayelsa state, said while some of his colleagues have been paid for some months, others have not been paid since they started work in June.

Oviasoje also said their severance allowance from the previous assembly has not been paid.


“In the last six, seven months the management of the national assembly has refused to pay aides their salaries. Majority of them, even the few of them that have paid have been shortchanged,” he said.

“We resumed work by June and most of us got [salaries] from August, September, the management deliberately delayed the issuance of letters to be able to perpetuate the fraud that they had in mind to do.

“As we speak right now, our severance has not been paid, months after the senate president gave us assurance that the issue has been resolved. As we speak, nobody has been trained. They just brought out a circular for training for LA1 and LA2 for the 23rd and 24th of December – meaning that they will have to travel with their families on Christmas day.

“For us, it is an attempt to discourage us from attending that programme for them to do whatever they like with the funds. The impunity in this institution is overwhelming.”