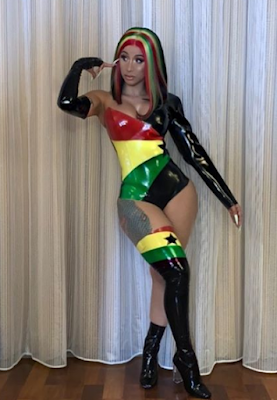 Ghanaians who saved the date, December 8, 2019 as the official turn up event for the Year of Return where left disappointed due to the poor organization of the highly anticipated ‘Livespot X Festival’ which saw Cardi B for the first time perform in Ghana.

People who trooped into the Accra Sports Station to witness the “historic event” at the end of the day rated it as the greatest flop in Ghana's entertainment industry.

The ‘not so impressed crowd’ ignorantly cheered on by giving the loudest shouts with their very last energy.

Disappointment was written on the faces of individuals who stood for hours waiting to witness their favorite Ghanaian artistes’ performance.

After hours of waiting, people began to leave the stadium symbolizing the end of the show without any official sign out from organizers.

Fans rained insults on the organizers with some calling for a refund of their monies used in the purchase of tickets which ranged from GHC50 to GHC800.

“I don’t know what to say, they told us a whole lot... I was expecting Patoranking and Shatta Wale, I am very disappointed because I bought the ticket with my hard-earned money. The organizers didn’t even tell us we’ve closed or something, I just stood there all these hours and now we are just going home because we are tired of standing”, stated a disappointed fan.

It took the intervention of Grammy award winner, Cardi B’s timely performance to save the day. She was quickly introduced on stage in an attempt to calm the nerves of the angry crowd.


Just as Cardi B was about to be introduced on stage, they started throwing bottles. #GHANA 🇬🇭
A post shared by Tunde Ednut (@tundeednut) on Dec 9, 2019 at 1:04am PST

GhanaWeb interacted with some individuals who had boycotted the show after long hours of standing and this was what they had to say:

“Other artistes that we were expecting together with the likes of Shatta, Sarkodie and Patoranking and the other people are not here. This has been the greatest flop ever; I feel this program has been a flop."

“The artiste that a lot of people were expecting to be on the show didn’t turn up. I think that is a total disrespect from the artiste… those artistes from tomorrow should come publicly and apologise to their fans who have travelled and paid tickets to come and watch them.”

“The show was a flop because Shatta Wale wasn’t here. I was expecting to see him, I am a fan. I came here to see him."

“I am disappointed. Why should I pay GHC50? Just take a look at the grounds, I can’t tell if the show has ended, they haven’t said a word. I paid GHC50, I could have used the money to buy food tomorrow,” a much-disappointed lady shared her experience.

Earlier in the day, Ghanaian celebrities, most people on social media got really pissed with the American rapper with some even threatening to boycott the show just because kept them waiting for hours for their scheduled meet and greet

Cardi B later showed up and fficially apologized to the celebrities who came for the meet and greet but didn’t have the chance stating that she was never made aware of the fact that she would be having a greet and meet with some Ghanaian celebs.