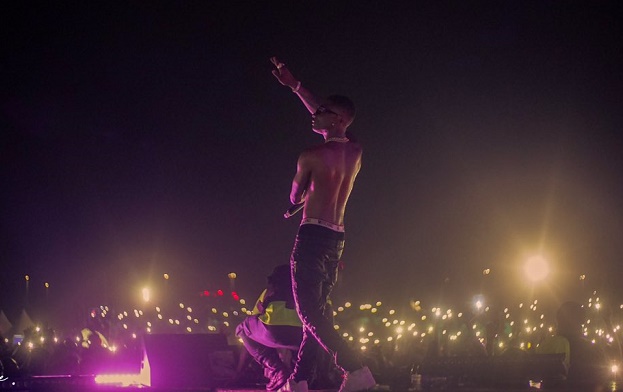 Video clips of a man lying helplessly after allegedly being shot dead by a policeman at Starboy Fest, an event organised by Wizkid, award-winning singer, have surfaced and gone viral online.

It was gathered that the incident occured on Thursday night outside the premises of the Eko Atlantic Energy City along Ahmadu Bello Way, Victorial Island — where the concert took place.

One of the videos showed people moving in different directions and a body lying on the ground, surrounded by a small crowd of people.

A minor squabble was said to have ensued between fans and security operatives attached to the event at the entrance of the venue.

Another footage showed security operatives firing teargas at a number of fans with many scampering for safety.

It was learnt that some angry youths took the victim’s body to a nearby police station in Victoria Island where they dumped the corpse.


RT @Miz_blac: #StarboyFestLagos This is the video of some guys struggling to save a life. 🙆‍♂️ Naija police shot him at the gate and ran away in their van! The boys have dropped the dude corpse in front of the Police station VI. @Gidi_Traffic #StarboyFest pic.twitter.com/sIU6KijPca

Tranquility, it was also gathered, was restored when the talented singer placed a call across to the security operatives to allow the fans enter the venue of the event — which was said to have accommodated more than its carrying capacity.

- Moment someone was allegedly shot by Police at wizkid show #StarboyFestLagos

" @Kloud_official : POLICE BRUTALITY IS NOT A JOKE!!! I literally saw the Cop shoot this Fan Dead over an argument at #STARBOYFEST " pic.twitter.com/eRnIxNNE4w
— SubDeliveryZone (@SubDeliveryZone) December 27, 2019

Some fans also took to Twitter to air their displeasure over the incident.

“What My Eyes Saw At #Starboyfestlagos Yesternite Wasn’t What I Expected, Twas A Little Fun But Wizkid Seemed Stressed, The Speakers & Mic Was Going Off Continuously And A Man Was Shot ( I Suppose Dead) Outside Eko Energy City, Multiple Gunshots That Had Me Scared For My Life,” said a Twitter user.


WHAT MY EYES SAW AT #StarboyFestLagos YESTERNITE WASNT WHAT I EXPEXTED, TWAS A LITTLE FUN BUT WIZKID SEEMED STRESSED, THE SPEAKERS & MIC WAS GOING OFF CONTINUOUSLY AND A MAN WAS SHOT ( I SUPPOSE DEAD) OUTSIDE EKO ENERGY CITY, MULTIPLE GUNSHOTS THAT HAD ME SCARED FOR MY LIFE. 💔💔
— KELECHI † (@_igwilo) December 27, 2019

“They are treating us badly at the gate @wizkidayo, please look into it,” another user wrote.

In a swift reply, Wizkid told the user that he “just called the gate! No one touching my fans! I’m coming down myself now.”