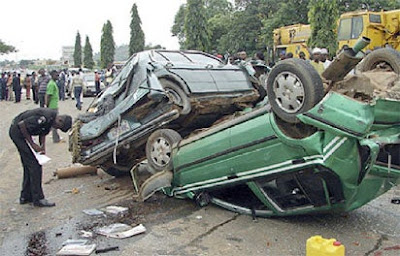 A hit-and-run motorist has crushed two persons to death at the Ijagun junction on the Sagamu-Ore Expressway in the Ijebu-Ode Local Government Area of Ogun State.

Okpe stated that the accident happened around 4.30pm.

She said the fatal crash involved two male adults, who were on a motorcycle.


The statement read in part, “The persons involved in the crash were two male adults, who unfortunately died.

“They were riding a wine Bajaj Boxer motorcycle with number plate AAB 052 VQ, when an unidentified vehicle hit them, but the driver ran away and the motorcyclist lost control and crashed due to the impact.

“The two corpses were deposited in the state mortuary in Ijebu-Ode.”

Okpe also stated that an earlier crash occurred around 5.10pm on Wednesday on the Lagos-Ibadan Expressway around Mowe bus stop in the Obafemi-Owode Local Government Area of the state.

She said three male adults were involved in the accident but no one died or got injured.

Okpe stated, “The suspected cause of the crash was wrongful overtaking, which led to the loss of control.

“The crash affected the tanker conveying petroleum product with some of its content spilling on the road.

“There was no fire outbreak due to prompt emergency response, but the gridlock that ensued lasted several hours before the transfer of the petroleum product to another tanker and the crashed tanker was removed from the road to restore traffic.”

“The FRSC, Ogun State Sector Commander, Clement Oladele, commended the Redeemed Christian Church of God for creating a thoroughfare yesterday (Wednesday) through the Redemption Camp from the Lagos-Ibadan Expressway around Mowe (between Lotto and the RCCG youth gate) to ease the traffic discomfort for motorists trapped in the gridlock that ensued after a tanker conveying PMS crashed around the Mowe bus stop on the Lagos-Ibadan Expressway,” she added.