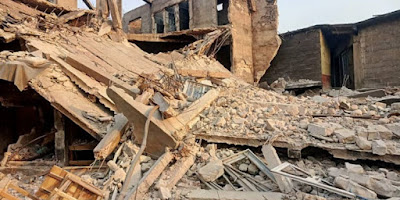 A building reportedly collapsed on Thursday at the Ochanja market in Onitsha, Anambra State.

The collapsed structure was said to be one of the plaza partially burnt last October during a fire incident at the market.

It was gathered that some persons, who were inside the building around 3:30pm, fled before the structure caved in.

An eyewitness, who identified himself as Chuka, said none of the traders was trapped.


“I don’t think anyone was trapped inside the debris. Most of them were fast enough to escape,” he said.

Police spokesman Haruna Mohammed said nobody was trapped in the building.

He said the police patrol team led by the DPO had visited the scene.

“Yes, the building partially collapsed, but nobody was trapped. There was no loss of life and no injury sustained by any person,” Mohammed said.