Sultan of Sokoto showers praise on Osinbajo, says his leadership from God 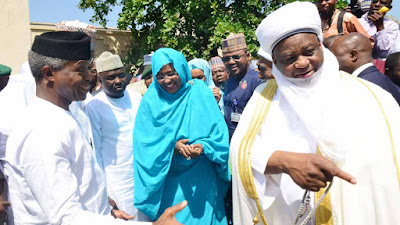 President-General of the Nigerian Supreme Council for Islamic Affairs (NSCIA) and Sultan of Sokoto, Muhammadu Sa’ad Abubakar III, has applauded the Vice President of Federal Republic of Nigeria, Por. Yemi Osinbajo for his leadership, which he said was given to him by God.

“We have the privilege of having the Vice President here who is a pastor, and I am pleased that he is here to listen to the comments we will make and to listen to him giving the keynote speech, which I believe he will say a lot having known him for some time.

“He has leadership given to him by the lord God Almighty, it is a trust and responsibility and he is here in his capacity as VP and we invited him to give the keynote speech as VP of Nigeria and he accepted to be here,” the Sultan said.

Abubakar made the comment at the opening ceremony of the General Assembly of NSCIA on Friday, an event Prof. Osinbajo was invited to give a keynote address.


Also, Professor Ishaq Oloyede, Secretary General of NSCIA said Prof. Osinbajo had successfully combined his religious commitments with public administration, something, he said, was worth emulating.

“He is a model of a person combining religious commitment with public administration. He has done that creditably well. Mr. Vice President we want to thank you on behalf of the Muslim community of this country. You are a pride to this nation, we thank you and pray that God will continue to be with you,” he said.

Prof Salisu Shehu, Deputy Secretary General of NSCIA praised the Vice President for gracing the event. “I believe as you have graciously accepted to be here to honour this event by coming personally, I believe that when resolutions are presented to you, we are sure that you’d give the necessary executive support to those resolutions.”

In his keynote address, Osinbajo commended the NSCIA for bridging the religious gap in Nigeria. “This Council is of particular importance to us as a nation because it not only promotes solidarity among Nigeria’s Muslims but also serves as an important intermediary between the government and the Muslim community and between Muslims and persons of other faiths.

“As the highest decision-making body of the Council, I offer to you this morning, both a commendation and a challenge.

“First, the commendation to you for the great leadership you have shown in galvanizing the Muslim community in Nigeria despite denominational differences. But also, for making the Council available for the promotion of interfaith peace, and religious tolerance in Nigeria.

“The challenge stems from the theme of this meeting which is “Islam and National Development.” Permit me to put the topic in context so that we do not miss the essence of the topic. So, I recast the theme to read as follows quote, “The Role of Islam in the Development of a Multi-religious and Multi-ethnic Nation.” This is the gravamen of the matter and I believe my brother, Isa Pantami (Honourable Minister of Communications and Digital Economy who delivered the keynote address) did an excellent job.

“Decades ago in this same country, it would not have been a major topic. Leaders in the first republic did not consider religious intolerance as a major national issue, they were more concerned about the issues that touched everyone regardless of religion or ethnicity; they were concerned about providing food, shelter, education and decent livelihoods. But today, no true leader can ignore the threat that religious bigotry and intolerance poses for the development of our nation. That is just the way it is.

“But it is my respectful view that the burden of ensuring that faith promotes national development as opposed to impeding it is on leaders. This is the challenge I pose to you today.

“A few months ago, at an interfaith gathering, I told the story of an occurrence on the 20th of June 2018. Christians in their village Nshar Yelwa, Plateau State were attacked by a horde of persons who were said to be Muslims, who had attacked other villages and had killed several Berom farmers who were mainly Christians.

“As Imam Abdullahi was finishing mid-day prayers, he and his congregation heard gunshots and went outside to see members of the village’s Christian community running helter-skelter. Instinctively, the Imam ushered 262 Christians into the mosque and some into his home next to the mosque.

“The Imam then went outside to confront the gunmen. He refused to allow them to enter, pleading with them to spare the Christians inside the mosque and his home. When the assailants were adamant, he told them that they would have to kill him first if they were going to kill the Christians, he had given refuge. They eventually left without killing any of the Christians in the mosque or in his home. Imam Abdullahi’s selflessness and sacrifice saved the lives of hundreds of people of a faith different from his own.

“Imam Abdullahi not only refused to give up the Christians he had given refuge; he even offered his life in exchange for theirs. His moral courage is rooted in a profound recognition of our common humanity. His compassion, empathy and selflessness are an example to us as people of faith.” Osinbajo concluded.