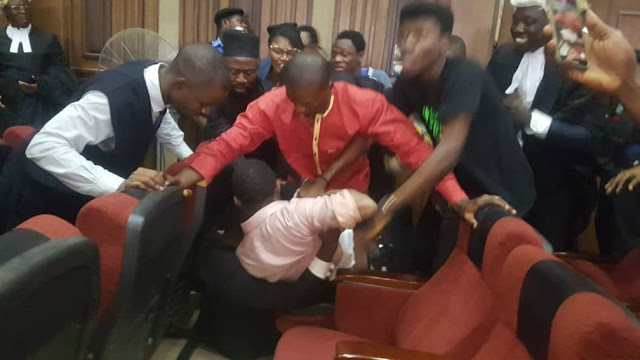 The Publisher of Sahara Reporters, Omoyele Sowore, may spend the upcoming Christmas period in the detention of the Department of State Services.

This is despite the announcement by the Attorney-General of the Federation and Minister of Justice, Abubakar Malami (SAN), on December 13, that he had taken over the prosecution of Sowore from the DSS.

The hope in the camp of Sowore, who is also the convener of #RevolutionNow protests, that he would be released from custody promptly with the AGF’s takeover of the case was dashed after the minister announced days later that he could not ask the DSS to release him from custody.

Sowore, who was re-arrested on December 6, within 24 hours of being released from detention that lasted over four months, has been detained by the DSS for two weeks without fresh charge instituted against him.

His lead counsel Mr. Femi Falana (SAN), described his client’s re-arrest at the Federal High Court in Abuja on December 6, and continued detention as illegal.

He said there was no warrant of arrest issued for the activist’s re-arrest or any order issued by a court to justify his continued detention.

Sowore and his co-defendant, Olawale Bakare, were first arrested in August and were later in September charged with treasonable felony among other offences, for calling for the ‘RevolutionNow’ protests, which the Federal Government interpreted to be a call for an overthrow of the regime of the President, Major General Muhammadu Buhari (retd.).

But ruling on the application which was moved by one of Sowore’s lawyers, Mr. Marshal Abubakar on Tuesday, Justice Inyang Ekwo said he needed to hear from the two defendants before taking a decision on the request for the “unconditional release” of Sowore.

He then adjourned the case till December 23 as he directed the Deputy Chief Registrar of the court to serve hearing notices on the two defendants.

The December 23 proceedings which would be presided over by a vacation judge would likely address only preliminary issue.

Falana had said in a statement on Tuesday that having taken over the prosecution of Sowore and his co-defendant, the AGF was duty-bound to ask the DSS to release Sowore from the “illegal” custody of the DSS.

Falana said Malami could not wash his hands off the “illegal detention” of the Sahara Reporters publisher like the biblical Pontius Pilate.

Meanwhile, the Peoples Democratic Party and the Coalition of United Political Parties, on Friday, opposed the continued detention of Sowore and other suspects who have been granted bail by the court.

The PDP National Publicity Secretary, Mr. Kola Ologbondiyan and the CUPP spokesman, Mr. Imo Ugochinyere spoke in separate interviews with one of our correspondents in Abuja.

Ologbondiyan said, “We are also worried that critics and those who do not share the same viewpoint with the same people in government are being incarcerated. We are concerned about our member in Kano State, Dan Dayita, who has not been released and has been denied accessed to his family.

Ugochinyere said, “The continued detention of Sowore is the highest affront to our constitution. It is a kind of military overthrow of the institution of democracy. It is obstruction of justice.”