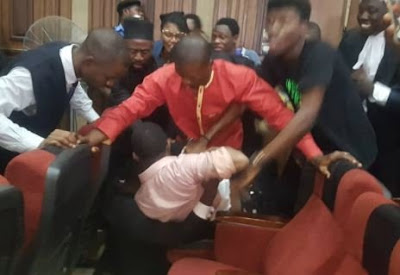 A coalition of civil society organizations has alleged that co-convener of  #Revolution Now protest, Omoyele Sowore, masterminded the drama witnessed at the premises of the Federal High Court in Abuja, to embarrass Nigeria before international community.

This is just as the coalition urged the Directorate of State Security (DSS) and other security agencies not to compromise internal security of the country in the face of cheap blackmail.

The coalition while staging a peaceful demonstration yesterday in Abuja, urged management of the Directorate of State Services (DSS) and the Nigerian Police to investigate and apprehend those involved in the make-believe drama.

Convener of the Guidance for Democracy Initiative, Prince Danesi Mohmoh, who spoke on behalf of the coalition, explained that the drama was plotted to mislead the media, thereby deceiving Nigerians.

“If you have ever had dealings with any Nigerian security outfit, you will discover that the laws that established them stipulate where and where they can operate, that was a courtroom for God sake,” Danesi said.

He, however, urged the DSS and police to apprehend and prosecute those involved in the drama, saying “I am using this medium to call on the DSS to speedy the investigation on that video footage and those people perpetrated the act should be brought to book.

“We do not see any reason the media will be cajoled to misinform the public. I was at the court the same day, and my message there was clear, that the judiciary upholds only the constitution and jettison pressure from any political and tribal sentiment.”

While fielding questions from journalists on the re-arrest and detention of Sowore, Danesi said:

“We don’t have a place for revolution in Nigeria’s Constitution; we have a place for transition. Some people are coming with the idea if revolution, we will resist them at all times and we will continue to resist them. We have advised them, they are Nigerians, they have the constitutional right to protest, but there is no one, including the president who has the capacity to call for a revolution, anybody calling for a revolution is on his own, and we urge well-meaning Nigerians to dissociate themselves from that call.

“If anybody wants to become the president of Nigeria, it can only be achieved through the ballot box not through revolution. You must join a political party, aspire and mobilise Nigerians for support. If anybody thinks he can tinker with the idea of violence or revolution, because he has earned from his foreign collaborators, Nigeria is not the right place for him.”