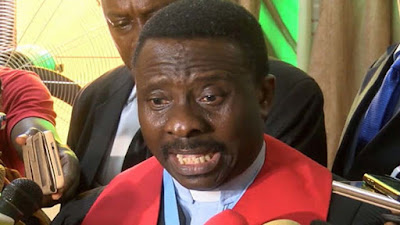 The Christian Association of Nigeria (CAN) has carpeted the statement by the Sultan of Sokoto, Sa’ad Abubakar, wherein he was quoted to have said that “It is a lie to say Christians are being persecuted in Nigeria.”

CAN had backed the inclusion of Nigeria in United States’ list of nations where religious intolerance was going on.

Kwamkur Samuel, CAN National Director of Legal and Public Affairs, in a statement on Saturday, said it would have been better if the Sultan had remained quiet the way he did when those killings were taking place.

Recalling the several hundreds of innocent people whose lives were cut short by the Fulani herdsmen in Southern Kaduna, Benue, Plateau, Adamawa, and Taraba state, CAN called it an insult for anyone to be claiming that the unprecedented persecution which victims were well known did not occur.


It said: “It is an act of disrespect to the dead. If those who were responsible for the genocide in the Middle belt of the country were Fulani atheists “whose main interest is to protect their cattle”, what stopped him from condemning the unprecedented genocide? By the way, if Fulani atheists took it upon themselves to be killing Christians the way they did in Benue, Southern Kaduna, Plateau, will it still not be called Christian persecution? Do the Fulani atheists have the right to be killing people the way they did and are still doing in some parts of the states?

“We are happy that the Sultan did not fault our claim that there was unprecedented killings in those areas may be the security agencies would have helped us to unmask the culprits and their religion if they had not appeared powerless while the killings lasted. It is reprehensible that to date, those who killed our brothers and sisters after raping and maiming them for weeks are still at large as if they were spirits.

“On the observation made by His eminence that if there have been cases of Christian persecution in the country we would have raised it at the Nigerian Inter-Religious Council (NIREC), where the leadership of both religions meet, we wonder why the Sultan too could not come to NIREC to fault our position instead of using the public forum. The Sultan should not pretend as if he was unaware of several times we had gone to President Muhammadu Buhari to complain about systematic and deliberate killings of our brothers and sisters and the need for the killers to be brought to book and the killings stopped to no avail

“The fact that we are meeting at NIREC does not mean that all is well. We believe that having dialogues with our Muslim counterparts can reduce the tension in the land if there is sincerity. As long as a highly placed traditional ruler who is also the head of the Muslims in the country is denying the obvious then we are not surprised that other Muslim groups talk in the same vein.

“The government to whom we had complained about the plight of our people in the hands of overzealous Muslims who said they were fighting Jihad was not convincing enough to show us that the action was not deliberate. We as well complained about lopsided appointments, especially the security chiefs which has not been addressed till today.

“Going the memory lane, five young men were arrested, prosecuted and convicted in Yola for killing a Fulani herdsboy but till today, none of the herdsmen killers has been apprehended. Those arrested for turning the Southern Kaduna to a graveyard were later released while those who killed two Christian women in Kano and Kubwa are still at large, yet the Sultan has joined MURIC in faulting CAN and the US government that Christians were being persecuted.

“Thank God, it wasn’t the Fulani atheists and Fulani Christians who constitute 98 per cent of the Security council and those who are presiding over most of the security agencies and the paramilitary agencies. Was it Fulani atheists that kidnapped Leah Sharibu and refused to release her because she professed Christian faith? Why did the government negotiate the release of the rest Muslim girls kidnapped and left Leah back because of her religion? Two years after the kidnapping, she has not been rescued by the government! Is that not religious persecution?

“According to a highly respected organisation, the Humanitarian Aid Relief Trust (HART), a British non-profit organization run by a member of the British House of Lords, Baroness Cox, not fewer than 1000 Christians were killed by the Fulani herdsmen this year alone while about 6000 have been killed since 2012 and 12,000 displaced. Yet none of those responsible for these dastardly attacks have been brought to book. If these are not persecution, what are they?

“President Muhammadu Buhari through one of his spokesmen even advised the victims to let go of their lands in order for them to be alive. He also advised against retaliation but instead to accommodate their killers yet the Sultan, MURIC and those who close their eyes to the evils are calling us liars! Just a week ago, a Christian lady around Gwoza was going for wedding, she was kidnapped by Boko Haram terrorists and slaughtered!

“About another ten were kidnapped while going to Maiduguri for Christmas according to the information received by Borno State Christian Association of Nigeria, the Muslims among them were released to go while eight out of ten Christians abducted were slaughtered while two ladies were taken away, obviously to be sexually assaulted! Wasn’t that not persecution?

“Our appeal to the government is to let the Constitution be its guide in all its policies and operations. The country belongs to all Nigerians irrespective of their religious and tribal persuasions and any policy that is discriminatory is nothing but persecution. We call on President Buhari to be fair to all Nigerians. We would stop complaining when we see a just society where the rule of law, fairness, and social justice are allowed.

“When the President released Col Sambo Dasuki and Omoyele Sowore, we hailed him despite the fact that Dasuki is a devout Muslim. We want those still languishing in detention after court granted them bail to be released forthwith. Let genuine democracy work in Nigeria and every Nigerian given sense of belonging through inclusive opportunities.”