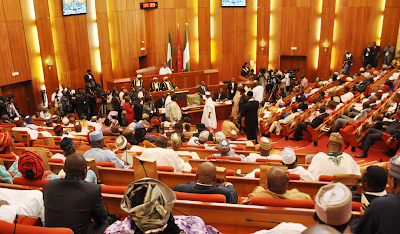 The Senate has urged the Inspector-General of Police (IGP) Mohammed Adamu to reduce the number of checkpoints on federal highways in the country.

This, according to the Senate, had become necessary to reduce the gridlock on the roads.

The resolutions were reached following the consideration of a motion by Sen. Chukwuka Utazi (PDP- Enugu North) during plenary on Thursday.

The upper chamber also urged Adamu to direct officers of the Nigeria Police to eschew all forms of extortion on motorists as alleged.


Utazi’s motion, coming under order 42 and 52 of the Senate Standing Rules, was entitled “National Security versus Disproportionate Road Checkpoints on Federal highways in the country”.

The senator said that the national security architecture of Nigeria had been stretched beyond its elastic limits.

According to him, acts of criminalities had put pressure on the country’s national security architecture, necessitating and compelling security agencies to confront security breaches headlong.

The legislator stated that while road blocks were necessary to curb criminal activities, its abuse for the unintended purpose was reprehensible.

All the resolutions were adopted by the senators after a voice vote by President of the Senate Ahmad Lawan.