Sadiq Daba to get N1 million from Ganduje 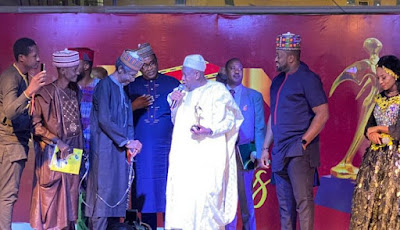 Ganduje made the promise on Saturday, December 14, 2019, in Kano during the Best Of Nollywood awards ceremony, which held inside Coronation Hall, government house, Kano.

The organizers of the movie awards ceremony had presented a lifetime achievement award to the ailing actor when Ganduje joined the team to present the award and made the announcement.

During the awards ceremony, Daba revealed that he is an indigene of Kano state but who had lived the better part of his life in Jos, Plateau state.


Recall that the donation is coming weeks after Dr. Joe Okei Odumakin made a call to Nigerians to help donate to keep the veteran actor and broadcaster alive.