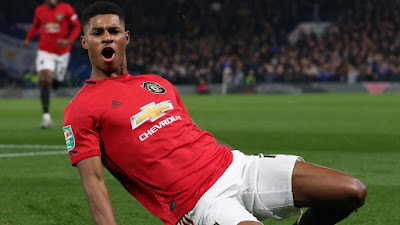 Marcus Rashford spoiled Jose Mourinho’s return to Old Trafford on Wednesday, scoring twice as Manchester United beat Tottenham 2-1 to end their former manager’s perfect start to his tenure at his new club. The England forward put United in front early in the first half and converted a second-half penalty to restore their lead after Dele Alli’s exquisite equaliser as United leapfrogged Spurs in the Premier League table.

Spurs went into the match two points ahead of United after their mini-revival under their new boss, who replaced the sacked Mauricio Pochettino at the London club last month. Struggling United had made their worst start to a season in 31 years but started brightly against the visitors, playing with energy and adventure and cutting through the Spurs midfield with ease.


The home side deservedly took the lead when Rashford beat Paulo Gazzaniga at his near post in the sixth minute — the forward’s 11th goal in his past 13 games for United and England.

Man-of-the-match Rashford, attacking from the left, surprised the goalkeeper with the power of his shot but Gazzaniga may feel he should have done better. Ole Gunnar Solskjaer’s side could easily have stretched their lead but Gazzaniga made amends by touching a thunderous Rashford shot onto the crossbar.

The Spurs goalkeeper made another smart stop minutes later, keeping out a curling effort from Rashford and Jesse Lingard also went close. It was a far cry from recent disjointed performances against Sheffield United and Aston Villa. Both of those matches ended in draws after United had taken the lead. But despite being a clear second best, Tottenham edged their way back into the game and were on level terms six minutes before half-time thanks to an audacious piece of skill from the in-form Alli.

Serge Aurier’s shot was saved and the rebound landed to Alli, whose sweet first touch took the ball away from Ashley Young and Fred. He let it bounce before shooting past David de Gea into the far corner. The England man looked a pale shadow of himself in the early weeks of the season but has bounced back in style, scoring four times in his past three matches.

United would have been disappointed to have been trailing at the break after their impressive first-half showing but they were back in front in the 49th minute when Rashford sent Gazzaniga the wrong way from the spot after being brought down by Moussa Sissoko. The match then fell into a familiar pattern, with United surging forward in search of another goal, with Rashford a constant threat down the left and Daniel James also looking dangerous.

Mourinho threw on Christian Eriksen in search of an equaliser as the game remained in the balance but despite some late pressure against a nervy United, they left Old Trafford empty-handed. Mourinho, sacked by United last December, won his first three matches in charge of Spurs, with his team scoring 10 goals in the process but he has problems to sort out at the back as he targets a Champions League spot. United are also eyeing the top four despite a big gap to close.