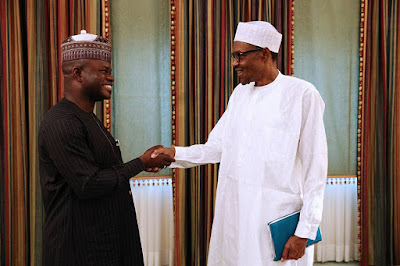 At a time many Nigerians have questioned President Muhammadu Buhari’s credentials as a democratic leader who supports the fundamental rights of the citizens, the Kogi State governor, Yahaya Bello, has rated Mr Buhari as “most democratic president I have ever seen.”

Mr Bello said the president was so democratic that he allowed Nigerians to know the crisis in his homefront, where First Lady Aisha Buhari has been clashing with his nephew and aides.

Read the governor’s comments to journalists at the State House:

How far have you gone with the issue of reconciling all parties?
Kogi State as you know was slightly divided before now but upon assumption of office and until the last general elections, I have been making every effort to ensure that there is reconciliation and bringing everybody on board. That was what resulted in the massive victory of the last general election. Leaders and stakeholders of the state have been called upon to join in the new direction administration, so we are moving on perfectly.

On Punch decision to refer to Buhari as a dictator?
Mr. President is the most democratic president I have ever seen. This is the first time we are seeing a former military head of state that is so democratic to the extent of allowing things happening in his home front to be democratized not to talk of things happening in the country. Whoever is tagging him to be a dictator, I think that person wished to be a dictator himself not Mr. President.

I think Mr. NSA, General Monguno must have been quoted out of context. I can say that because the last general elections reflected the wishes of the people.

On the National Bureau of Statistics (NBS), listing Kogi state as the most corrupt state in the country.
“You see, you have to look and read the details of that report before you can judge. You see, we shouldn’t just listen to somebody and quote him out of context. Like I said, Kogi State before now, civil servants before you become a permanent secretary you must pay through your nose before you become a permanent secretary but this time around it has been merit-based.

Before you become a local government chairman, or let’s take it from the political aspect, I am the leader of APC in Kogi State, no single person obtains a form or becomes whatever and will claim to have paid one dime to any political leader. It is out of blocking the loopholes and leakages that we have been able to raise the revenue of Kogi State from the pittance of N300 million to over N1 billion on a monthly basis. If you look at the percentage then you can be the judge. So if anybody is saying Kogi State is the most corrupt state, then that person must have his facts wrong.

Kogi State is the most prized state in the country and it is out of fighting corruption as well because the little resources we have, we are so managing it that we are developing the state and fighting insecurity. If corruption is that prevalent then that wouldn’t have happened.

What will be the focus of your government in the second term?
Human capital development; continue on infrastructure development and continue on the trajectory we are in now and ensure Kogi State is taken to the next level.