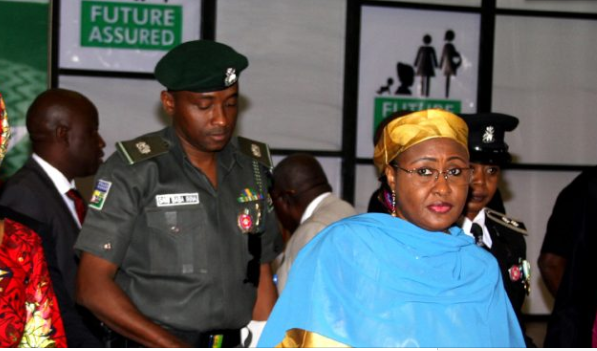 Aisha Buhari, wife of President Muhammadu Buhari, has accused presidential aides of failing to speak up on important matters but rather commenting on unnecessary things.

Speaking on Journalists’ Hangout, a programme on Television Continental (TVC), the first lady cited instances where she felt the presidential aides did not do enough to dispel fake news peddled about Buhari and Vice-President Yemi Osinbajo.

During the phone-in programme, the first lady said the society will know no peace if people are allowed to spread fake news without consequences.

“A typical example is what happened is that whenever they (aides) are supposed to take action against the offenders, or to take action or to take charge or be in control, or caution people, they keep mute. But when it comes to unnecessary things, people will start talking from the Presidency,” she said.


“A typical example is what happened after the election in Bayelsa State. When the PDP (Peoples Democratic Party) people came out and said they would suspend His Excellency, Goodluck Jonathan, the former president, for doing wrong or something like that. I saw no reason why people from the presidency came out to say that they were shocked to hear that; is it their business? Are they PDP members? Is President Jonathan a member of our party? What does that have to do with the presidency?” she asked

“They are now taking to social media to bring down the government itself. I think that we should not allow people that are nobody and nothing to override the innocent; I don’t know why people that are supposed to be in charge should remain mute while bad people take over the government from us. It is impossible and totally unacceptable.”

Asked if she had ever been told to be mindful of her comments, she replied: “Who will stop me? Everybody is talking in the country (laughs). It is a serious matter, nobody is safe, no consequences, everybody should talk.”

Buhari’s wife, who recently backed the proposed legislation for the regulation of social media, also accused some ministers of treating fake news with levity.

“When something happens, something that a minister is supposed to come out and say, they don’t say it,” she said.

“In that very place, the minister gave an example, the Minister of Communications gave an example, saying that somebody called the VP, His Excellency Prof Yemi Osinbajo, saying ‘why did you resign?’

“He (Osinbajo) said ‘No, I did not resign. Who told you that I resigned?’ The man said he saw it on social media and everybody in that hall laughed.

“When I got up to give my speech, I said it is not a laughing matter. I was surprised that everybody laughed. What does that mean?

“That they should continue saying that somebody like a whole Vice President of a country, a country of 200 million people, somebody faking that he has resigned?

“The Minister of Communications that is supposed to give an order, to bring an end to fake news, talked about it and everybody laughed and that was the end of it. No consequences for any offenders? Nothing? You say what you like and you go free.

“There is no way we will have such a society and have peace in it. When there are no consequences, everyone does what they want and almost everything is in disarray.”