Presidency reveals how Nigerians would benefit from Buhari’s foreign trips 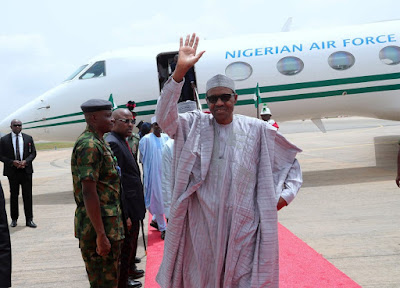 Mr. Ajuri Ngelale, Senior Special Assistant to President Muhammadu Buhari on Public Matters, says Nigerians are benefitting from the goodwill of the President.

Ngelale said this in an interview with the News Agency of Nigeria (NAN) in Abuja while speaking on the impact of the President’s foreign trips.

He said Buhari’s foreign trips have been productive as other nations now described the President as an incorruptible and credible leader.

Ngelale expressed optimism that President Buhari’s trips would yield positive results in the form of a stronger national economy by virtue of the bilateral agreements he signed Nigeria into.


“Those trips have been extremely productive.

“We are now benefiting from the goodwill of the president largely because of the fact that the world knows that this is an incorruptible leader – a leader with credibility and integrity.

“And Nigerians are now benefiting from that,” he said.

“President Muhammadu Buhari’s excursions to the Russian Federation and the Kingdom of Saudi Arabia have been very much in the interest of the country.

“I say that because when you look at the deliverables from those trips, you will realize the extent to which those trips have now added value to our nation’s economy.

“Specifically, we are really excited about the Russian trip because we had a lot of series of negotiations that culminated in agreements that we have now signed bilaterally which are all government-to-government transactions,” he said.

The presidential aide said that some of the sectors that would directly benefit from the bilateral agreements are solid minerals development, transport, iron ore mining, and defence.

In the solid minerals sector, the Ajaokuta Steel Company will be resuscitated via a one-billion-dollar facility that would be shared by the Russian Federation, the Nigerian government, and the Afrexim Bank.

According to him, in doing so, Nigeria will be able to revitalise the steel complex and stop the importation of steel.

“We seek to industrialise our country and employ our people and lift our people out of poverty.

“We’ll finally be able to produce our own steel,” he said.

According to Ngelale, an agreement struck with the Russian government will see that country supplying Nigeria with 12 M1-35 attack helicopters which will be used in tackling security challenges confronting the country.

“These are heavily weaponized, very stealthy, very fast attack-helicopters which will make a difference in terms of anti-piracy.

“We are going to be getting some physical infrastructure from them in terms of gunboats, gunships, and things that will help secure our maritime territory, our coastal waters.

“We are going to be building train cars in Nigeria thereby decongesting the ports, and taking the pressure off the roads,” he said.