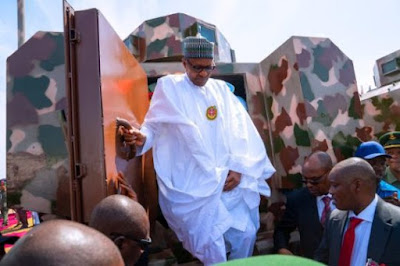 The vehicles named Ezugwu MRAP were produced by the Defence Industries Corporation of Nigeria (DICON), an indigenous firm, for the Nigerian Army.

They were launched by the President at the opening ceremony of the 2019 Chief of Army Staff Annual Conference.

Buhari praised the gallant efforts of the Nigerian Armed Forces in routing terrorists and combating insurgency in the on-going operations in the North East.


He pledged that his administration will continue to support the military to achieve its goals in addition to prioritising their welfare and that of their families. 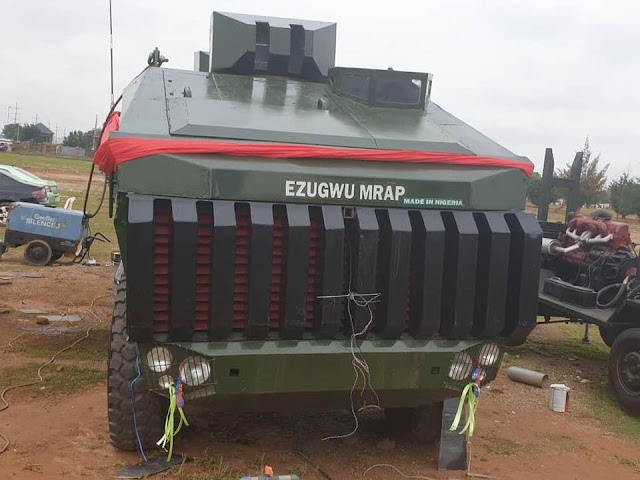 On the Ezugwu MRAP, which will be mass-produced by DICON, the President said: ‘‘I note the collaborative efforts of the Command Engineering Depot with relevant indigenous organisations to promote local content towards developing our military-industrial complex.

‘‘I am glad that the production of Ezugwu Mine Resistant Ambush Protected (MRAP) vehicles which I will be unveiling today will join the infantry patrol vehicles that were earlier produced as testimony that our efforts are yielding positive results.

‘‘Additionally, your efforts in terms of capacity building, training and conduct of exercises are quite commendable.

‘‘I am aware that there are on-going field exercises such as Atilogwu, UDO 1, Exercise Akpatuma 2 and Exercise Crocodile Smile 4, among other civil-military cooperation activities.

‘‘These are impressive efforts geared at enhancing the operational efficiency of the army as well as facilitating a conducive security environment for social, economic activities to thrive.’’ 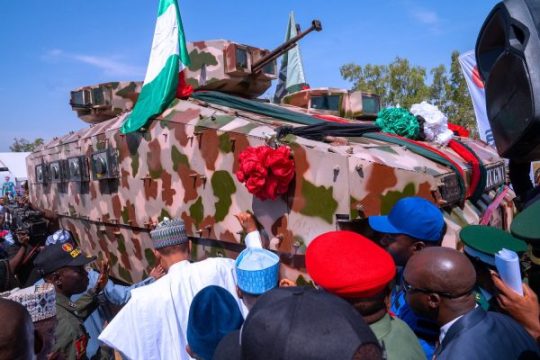 President Buhari also paid tribute to military personnel who had paid the supreme sacrifice in defending the sovereignty of the country.

He urged the soldiers to abide by the ethics, ethos and code of conduct of the military, while ensuring that human rights and international humanitarian laws are promoted and respected in the conduct of military operations.

Reaffirming his administration’s resolve to do everything within its constitutional power to ensure the security and safety of law-abiding citizens, President Buhari said: ‘‘This is a commitment we have made and will continue to keep.’’

The President commended the laudable efforts of the Chief of Army Staff, Lt.-Gen Tukur Buratai, in transforming the Nigerian Army.

‘‘He has keyed into the Federal government Change Agenda and I particularly commend his thrust in the critical areas such as innovative and inventive approach to produce military hardware, infrastructural development, restructuring and reorganisations, among others, with significant results particularly in the on-going counter-insurgency operations and other operations across the country,’’ he said. 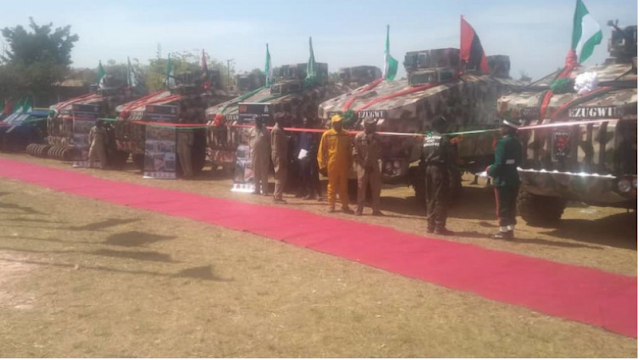 The hospital was upgraded to a level 4 United Nations hospital to cater for the medical needs of the military and civilian population in the country.

In his goodwill message, Gov. Nasir El-Rufai of Kaduna said the State was privileged to play host to several military formations, units, schools and establishments, adding that this was beneficial in fostering synergy between the military and civilians.

The governor specifically commended the Nigerian Army for their roles in sustaining peace and security in Kaduna State, enumerating their efforts at restoring peace and stability in Southern Kaduna, in addition to decimating the capacity of cattle rustlers and kidnappers operating in the state and its environs.

Gov El-Rufai also lauded the army for playing a key role in confronting the menace of the outlawed ‘El-Zakzaky movement’, which had oppressed the people of Zaria for the last 30 years, as well as various corporate social responsibilities including medical outreaches and infrastructure interventions in Kaduna State.

In his remarks, the Minister of Defence, Major General Bashir Magashi (Rtd) thanked the President for his continuous support to the Nigerian Army, adding that the Federal Government would continue to support the military ahead of the final onslaught on Boko Haram in 2020.

‘‘The Nigerian Army has had a hectic year with a lot of operations conducted to secure the territorial integrity of Nigeria. There is a need for a review of activities during this annual conference to prepare for next year’s final onslaught on Boko Haram,’’ he said.

Also speaking, Lt. Gen. Buratai emphasised that the current transformation of the Nigerian Army to its current status of a professional, highly-motivated, innovative and people-centric institution commenced in 2015 when the President was sworn in for his first term in office.

According to the army chief, the conference themed ‘‘Application of the Cutting Edge of the Nigerian Army in Tackling Contemporary Security Challenges’’, is aimed at evaluating efforts at achieving the overall objective of better positioning the Nigerian Army to face the task ahead in the year 2020 and beyond.