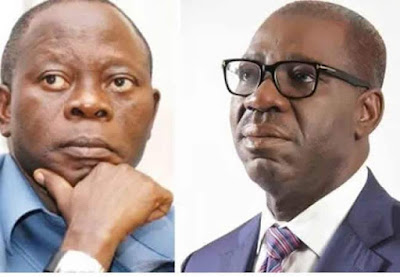 The National Chairman of the All Progressives Congress (APC), Comrade Adams Oshiomhole, has accused Governor Godwin Obaseki and his deputy, Phillip Shuaibu of unleashing mayhem on members of the party in Edo State.

Oshiomhole also alleged that Obaseki and Shuaibu do not have a political base in their locality, describing the two who claimed to have learnt from him as poor students.

Oshiomhole said as a sign that the duo lack grassroots support, they both lost their polling units during the last Presidential election, adding that at the moment, the governor is being represented by a PDP Senator and House of Representative member at the federal level.

A statement made available to journalists on Sunday by the Chief Press Secretary to Oshiomhole, Simon Egbuebulem, said that Obaseki refused all entreaties to build on the gains of the party by allowing peace to reign, but rather threatens to crush those who brought him into office.

The former labour leader said he never taught the Governor and his deputy to lose election or how to unleash violence on the people and threatening to crush them.

The statement added, “I have read them on several occasions saying that I taught them all they are doing today. This is laughable because I never thought them how to lose elections.

“These in my view were early morning signals about the need to change tactics, stop threatening people and saying you will crush them. Who are you crushing?

“But I won my entire senatorial district for Mr President and I am being represented by an APC senator and House of Representatives member. Then his Deputy, Philip, in Jattu where he comes from, in his polling booth where he and his family voted, Philip Shaibu lost.

“He lost his booth during his own governorship election in which he was standing as Deputy governorship candidate. So if he learnt from me, he should have learnt well because I never lost election in my village.

“There is no body in my village who can work against me because when I go home, I relate with them, I am an ordinary man. You must know when to talk tough and when to talk soft.

“When I am in my village, I am just like an ordinary man. I argue and play with my people. The only man that was in PDP in my village, the youths said how can he be doing PDP? But I said no, you have to persuade him to join us.

“And today that young man is one of my PAs. So he (Philip) is one of my very poor students, Kakhi is not a lesson and fighters must be tactful and strategic. No sensible man will fight people who voted for them. Those they are fighting now, some of them delivered 95 per cent of the votes in their units while they lost their own areas.

“The other day when Shaibu led thugs to my village with Okada riders and he said during my court case Okada people were following us. It shows how poorly he can interpret situations. Did we ever use Okada riders to intimidate ACN elements then, never.

“And those Okada riders were not hired by me, they bought into my vision. They have heard of me as President of NLC and on that basis they all voted for me, so when I was rigged out they took the fight to the PDP.

“The problem is that Philip does not know the difference between family disagreement that can be settled through conversation and political opponents that need to be fought and defeated. But even my language is defeat my opponent and not crush my party members.

“It is only Philip and his boss that talks about crushing APC members. If you become a crushing machine and God enable you to crush your people who will you govern when you win?

“When elections start between us and PDP unleash that energy, you cannot possibly be making electoral sense by using your office or position to attack, brutalize and intimidate and even lie against your party members. And all I have tried to do is to tell him (Obaseki) that you will never have a political party that looks like a golf course.

“A political party is like a forest, in that forest you have many animals. The politician is the guy who goes into this forest, knowing fully well that all the dangerous animals are there but he is going for the antelope or the grass cutter which he wants to use to feed his family. He goes there get his antelope or grass cutter home and feast without being crushed.

“In my first term election when I don’t know the politicians too well, I won Oredo, Egor, Ikpoba-Okha we were only rigged out in Ovia and Orhiomwon in 2007.

“It is those Benin votes and the small we got from Edo North that we used to defend my mandate in court. Look at the way they humiliated Ogbemudia’s daughter for refusing to abuse me, the woman only said I cannot abuse Comrade rather as a mother I will join hands to settle the dispute between you people. But they said they don’t want settlement they want to crush. Three days later they crushed the woman by suspending her as chairman of Egor Local Government.

“So it is a pity that they don’t know the difference between internal contestation and internal mechanism for resolving them and fighting the opposition.

“Killing is out of the kind of politics we practice, maiming is out of it. Now I told him Mr governor, with all the reservation people were raising, talking about history, we convinced them to support you and it worked for you and you got elected, even if the margin of defeat was not as much as my own, but they worked for you.

“Then why do you now want to distort the system by creating so called new political structure, is there a structural defect? He said he will retire all the politicians but I said to him will you retire somebody you did not hire. Most of these politicians I met them in the business.

“I have to go to their houses to convince them that I want their support and when they gave me that support, I worked hard to appreciate them. So if this is being foolish I want to remain foolish. As long as they work for me and Edo remain the only state in the South South that we have APC.

“The only thing I invested in defeating PDP in Edo state is my integrity and my capacity to persuade and mobilize. Politics is a leveller, people who are detained by their ego can’t make it in politics.

“I do not know any political party where you don’t have disagreement but as leaders all you need to do is to call them and explain yourself. If it happens they are right and you are wrong, you apologize. For me this remain the way to go calling everybody together. Not the clapping society where you selected those who praise you to high heaven.”