NUJ reacts over sealing of The Sun premises 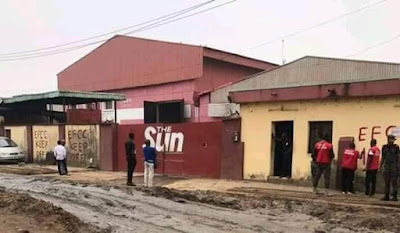 The Nigeria Union of Journalists (NUJ) has reacted over the sealing of The Sun Newspapers premises in Lagos State by the Economic and Financial Crimes Commission (EFCC).

The EFCC had given a notice to staff of the organisation to vacate the premises and allow for a take over by the Commission.

The NUJ, in a statement by its National Secretary, Shuaibu Usman Leman appreciated efforts of EFCC in fighting corruption in the country but cautioned that any attempt to throw journalists out of work for whatever reason is not good for democracy.

The statement reads: “The NUJ is worried by the recent developments at The Sun Newspapers in Lagos where the Economic and Financial Crimes Commission had given a notice to staff of the organisation to vacate the premises and allow for a take over by the Commission. The EFCC said it will enforce a court judgement which ordered for the seizure of property belonging to Senator Orji  Uzor Kalu who was convicted of fraud.


“While we appreciate the efforts of EFCC at fighting corruption in the country but we hasten to caution that any attempt to throw Journalists out of work for whatever reason in such a hasty manner is not good for democracy. The media as pivots to good governance and democracy must be allowed to flourish unhindered. We, therefore, urge for restraint in this regard to allow for the appeal filed to be determined first before any decision is taken.

“We are afraid that moving hurriedly to seal off The Sun may be misconstrued as politically motivated. This action regrettably is being taken without any consideration to the essence of preserving vibrant and virile journalism at this time when the profession is facing increasing challenges. We need to preserve the jobs of the media workers in The Sun Newspapers by being circumspect and prudent in this respect”.