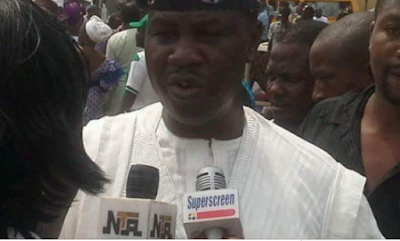 Babatunde Gbadamosi, former governorship candidate of the Action Democratic Party (ADP) in Lagos state, says his statement on the release of Omoyele Sowore and Sambo Dasuki was quoted out of context.

Gbadamosi was reported to have said they were released to divert the attention of Nigerians from the “unsuccessful attempt on the life of ex-President Goodluck Jonathan” which happened a few hours earlier.

Thank God for the announcement of the release of Sowore and Dasuki, but I cannot shake the feeling that it was announced to divert attention from last night's unsuccessful attempt on the life of President @GEJonathan
— Babatunde Olalere Gbadamosi (@BOGbadamosi) December 24, 2019

Speaking with journalists on Thursday in Lagos, Gbadamosi said his tweet was just an opinion and a suspicion, not a statement of fact.

“A couple of days ago, I posted a tweet where I thanked God for the release of Sowore and Dasuki and I said further in that tweet that I could not shake the feeling that it was timed to divert public attention from the attack on President Goodluck Jonathan, ” Gbadamosi said.

“This was simply my personal opinion and observation. I was quoted out of context.

“I felt like the government might want to douse tension that might be generated from the attack on Jonathan by focusing the public attention on the release of the two gentlemen while carrying out investigation on the incident at Otuoke.

“What I simply stated was an opinion, a suspicion to which I’m entitled to. And if the public space has become one where an opinion cannot be stated, then we really are in trouble in this country.

“My opinion should have generated a public discussion. But certain elements in authority seem to think otherwise. This kind of intolerance does not belong in a democracy. My intention was to ignite debate.”