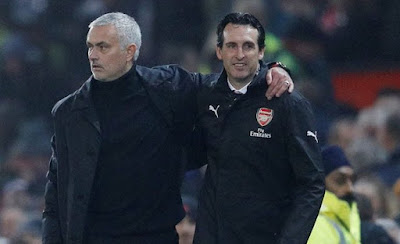 Tottenham Hotspur manager, Jose Mourinho, has aimed a dig at club executives, who appoint managers with no experience, hours after Mikel Arteta was confirmed as Arsenal’s new boss.

He has now signed a three-and-a-half year deal with the Gunners, to replace Unai Emery.

Mourinho, speaking to the media ahead of their Premier League clash against Chelsea, suggested Carlo Ancelotti should have got the job.


“The only point I can find – and it is for us to laugh a little bit – is that years ago the best managers were the guys with more victories and now the best is the guy with the fewest defeats.

“So Ancelotti has three Champions Leagues, won the league in Italy, France and England and won cups here and there – but Ancelotti has lost, I don’t know, 200 matches?

“I think now it is not about how much you won, it is about the matches we didn’t lose. So probably the best managers now are the managers with zero defeats.