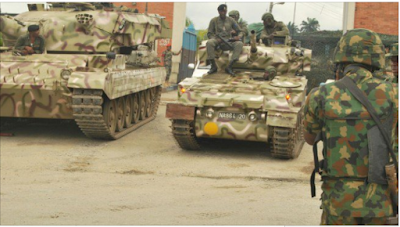 The Nigeria Defense Headquarters (DHQ), on Friday announced the winding down of Operation Whirl Stroke (OPWS).

OPWS, launched on May 2018, with a mandate to end the herders/farmers crisis, covers Benue, Taraba and Nasarawa states.

The troops were also tasked to flush out all armed militia gangs terrorising parts of Benue and Taraba.

The Acting Director, Defence Information, Brig. Gen. Onyema Nwachukwu, told newsmen in Gbise, Katsina-Ala Local Government Area, that the DHQ was not planning to immediately shot down the operation.


He said that even though OPWS had achieved its set mandate, the proposed winding-up would be in phases.

“It is not an out right shutdown of the operation, so it is not as if we are going to pack our bags and vacate the operational arena. That is not going to happen. So, we don’t want anybody in Benue and Taraba States to panic unnecessarily”, NAN quoted him as saying.

“What is actually going to happen is that we have a mission and our mission fundamentally is to restore peace in Benue, Taraba and Nasarawa States and, to a very large extent, that mission has been achieved.

“There is going to be a draw down but not immediately. It will be in phases. As we wind down the operation, we have some benchmarks that have been put in place to ensure that there is no resurgence of this criminality,” the General explained.

He said that the task force had also liberated Gbise community, which was hitherto under the control of some criminal gangs, with community members paying royalties to him.

The Force Commander, OPWS, Maj. Gen. Adeyemi Yekini, who also spoke, disclosed that the outfit had conducted 23 peace meetings with stakeholders as a result of the Tiv/Jukum crisis.

Yekini said that the approach of OPWS was always two-phased – kinetics and non-kinetics -, adding that it had helped in ending Tiv/Jukun crisis.

He disclosed that a total of 55 members of criminal gangs, who were either direct gang members or informants of notorious groups, were arrested.

“Our first task was to liberate Gbise and Katsina-Ala Local Governments from the grip of criminal gangs. These places have suffered so much in the hands of these criminal elements and even formed almost a state within a state.

“We felt that this shouldn’t be acceptable; we only have one indivisible country and will not allow any criminal or hoodlums to terrorise the public and carve out an empire for themselves.

“We are able to achieve our mission and the area is now finally peaceful.”