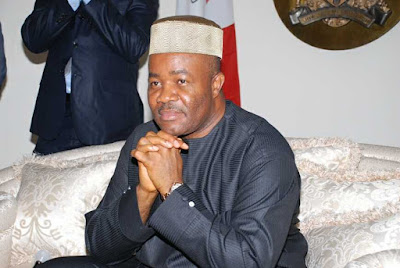 Niger Delta Affairs Minister Godswill Akpabio has attributed the high-level of indebtedness of the Niger Delta Development Commission (NDDC) to massive looting of the agency under previous administrations.

Senator Akpabio told newsmen in Abuja that those who were saddled with the responsibility of managing NDDC over the years had used it as a cash cow in the past.

According to the minister, the commission, which was created to meet the critical amenities’ needs of the people and communities in the region, had been hijacked by politicians and used to service their electoral funding needs.

He said the real needs of the people had been abandoned by those who ‘captured’ the commission in the past, spend funds on projects he described as ‘useless projects’, which have no real bearing on everyday lives of the people of the region.


The minister said: “I always say that he who works in the pulpit can eat from the pulpit, but not to steal the pulpit and what had happened in the past was that people go there and steal the pulpit. When you steal the pulpit, the next manager or preacher has nothing to preach from and that’s how you hear about the indebtedness of the NDDC and all that because at any point people just go there, amass wealth, either for electoral purposes or for personal use and the place is abandoned.

“The poverty in the area, the ecological problems, the environmental hazards, the disconnect between the NDDC and the people of the region, all these things collectively, your heart will be bleed when you see what is going on. Billions, like N200, N300 billions are spent on useless programmes of desilting of drainages or doing programmes for widows and widowers, okada riders and all that.

“Then, you’ll see that a place where they could have intervened like roads connecting two regions, like the Sapele/Warri Road, Benin Road or places like Bayelsa where in Elebele a bridge collapsed and then, the people have no drinking water. Then, go to Ogoniland, because of soil pollution, there’s no drinking water and nobody thought of a creative way of providing clean and potable water for the people.

“People are suffering from cancer and other diseases and no good hospital that one could say was built by the NDDC, equipped for the purposes of a modern day 21st century hospital that people could go and have succor.”

“Collectively, those things were the things that made me, when I was a governor, to ignore NDDC. Even the quality of works they call roads, within the first rainy season the roads are washed away. It’s years in year out and for me, because I have the experience and I was able to perform as a governor for eight years.“Without being boastful, the roads I did between 2007, 2008 don’t have potholes till today, eleven, twelve years after. So today I can say I am in the right place to be able to know the difference between good governance and bad governance