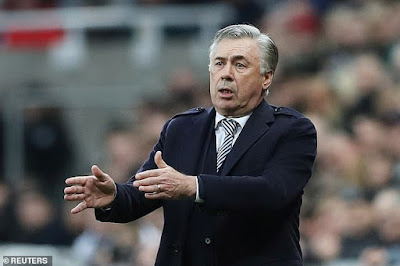 Manchester City will provide a test of seeing how genuine Everton’s revival is, Carlo Ancelotti on Tuesday, despite the Premier League champions’ shaky campaign.

Everton coach Ancelotti, 60, has guided Everton to two wins in his first two matches in charge since replacing Marco Silva, who was sacked in early December after they slipped into the bottom three.

However, Ancelotti — one of only three managers to have won the Champions League three times — says City will provide a more realistic barometer on where Everton stand despite the welcome wins over Burnley and Newcastle.

“Against Man City, this is a fantastic test to see where we are at,” Ancelotti said at his pre-match press conference.

“They are a really strong team but we can have the confidence to do our best.

“I think at this moment it is good to have this kind of test.”

Ancelotti, who in his previous stint in England won the domestic double with Chelsea in the 2009/10 campaign, said City remained a formidable opponent even if their defence of the league title has gone awry and trail leaders Liverpool by 14 points.

“Maybe City aren’t at the same level as last year but they still remain a fantastic team with fantastic players and a fantastic manager,” he said.

“It will be really tough to compete with them, but we need to have the confidence to compete and to be focused on our football.

“We don’t have to look too much to the opponent because they are really strong so it’s better to be focused on our idea of football.”

Ancelotti, a two-time European Cup winner as a player with the outstanding AC Milan side of the late 1980s and early ’90s, heaped praise on City manager Pep Guardiola, who he replaced as Bayern Munich manager when the Spaniard left to take over City in 2016.

“We’ve met some times, not a lot in games, but I have a really good relationship (with him) and a lot of respect for him.

“He is a genius; he’s always tried to do something special on the pitch.”