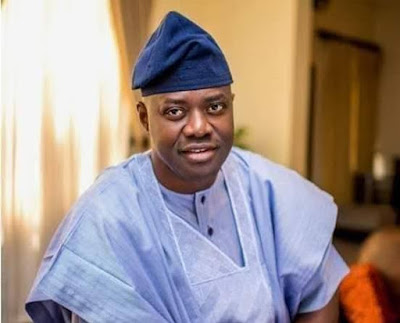 The All Progressives Congress (APC) in Oyo has literally drawn battle line with the State Governor, Seyi Makinde after he said Abiola Ajimobi, his predecessor, left a balance of only N19,000 from N5.2 billion he allegedly withdrew three weeks to handing over power.

It was gathered that Makinde made the disclosure of Ajimobi leaving only N19,000 out of the N5.2 billion during a live programme of Oyo state broadcasting corporation, tagged “Live chat with GSM, a quarterly session with the Oyo State Governor”, on Saturday.

He said the Ajimobi’s administration was marred by corruption, adding that the persons involved in the N5.2 billion fund withdrawal will soon be called to explain their roles.

Makinde said the state’s financial status was in a poor state when he assumed office, adding that his administration has increased internally generated revenue after blocking identified loopholes.


“If I should talk about the finances of Oyo State as at the time we came on board, some people will not be able to walk on the streets. Up till date, we have not bought vehicles for the office holders.

“If we are to buy official vehicles for myself and other office holders, we will not spend less than N3 billion and we cannot afford that now. Up till today, I am still using my personal cars in office. Our priority is to the people. We prioritise what we can do to the people who gave the opportunity to serve them.

“On May 6, 2019, three weeks to take over, the last administration withdrew N5.2 billion and spent it to remain N19,000 by May 29. Soon, those involved will have to explain how they spent the money to the people,” Makinde said.

The governor said he was scared when he discovered that Ajimobi’s administration operated over 60 banks.

Makinde said his administration has been able to prune down the accounts and centralised it to promote transparency.

“When I resumed, I was scared. The government was running over 60 banks accounts. So I asked for all the balances of the accounts. A particular account has N300 million, and another has N20 million. I asked the accountant general to prune the accounts down and put all the money in one account and which came to about N6 billion.

“When we assumed office, some people came to me and said that this is how they share money. I said don’t share the money to me. Let us use it to better the lives of the people of the state. IGR has gone up a bit because we have blocked loopholes,” the Governor said.

The governor said his administration will continue to prioritise the people of the state and deliver on its mandate.

However, in a swift response, APC in Oyo described as unfortunate and regrettable the comments made by Governor Seyi Makinde and denied wrongdoing by Ajimobi, stressing that the former Governor offset some bills before leaving office.

In a statement issued in Ibadan and made available to journalists at the weekend by its Assistant Publicity Secretary, Prince Ayobami Adejumo, Oyo APC asked Makinde to come out clean on the amount of cash gifts from corporate organizations which he has used on superfluous road and junction decorations in part of the State capital.

The party also urge the Governor to be aware of the fact that the time for real governance is here as against the cosmetic approach which portrays him as still being in a campaign mood several months after his assumption of office.

“We watched and listened to the live interview programme hurriedly packaged by the Governor’s media handlers to herald the superfluous celebration of the Supreme Court verdict which came in their favour unexpectedly. The highpoint of the interview was the needless embarrassment caused the people of the state when Gov. Makinde said that the judges who ruled against him at the Appellate Court were compromised by those whose names he could not mention.

“The governor was so emphatic in his careless statement that all his followers who accompanied to the studio were caught in palpable awe and bewilderment. Apparently, Gov. Makinde was prepared to take the said judges to the cleaners while he singled out the judge who ruled in his favour as the only upright man among the panel of judges. This is on record and we demand an apology from the governor to the Honorable Justices affected as well as the nation’s Judiciary as a whole.

“We feel shortchanged with the composition of the panel of judges of the Supreme Court which sat on Oyo gubernatorial tussle last Tuesday as the wife of a PDP stalwart was made the Chairman and the same panel threw out the Appellate Court’s judgment which was in our favour but as democrats and law abiding citizens, we took everything in good faith and we have resolved to move on.

“Furthermore, Gov. Makinde continued with his usual grandstanding when he said that his predecessor received a sum of N5.2b on May 6, 2019 and left only N19, 000 in the state government’s account when handing over on May 29, 2019. But the governor did not add that Sen. Ajimobi, within the same period, paid staff salaries and offset some other bills which would have made the new government face the challenges of unnecessary debts in their first day in office.

“Funny enough, Gov. Makinde shot himself in the leg again when he unconsciously stated that on assumption of office, he was able to mop up public funds kept in about 67 different accounts belonging to the state government and this he put at about N6.2b. As if this was not enough, he exposed himself as he tried to fool the public over the stupendous financial resources spent so far on light decorations in some parts of Ibadan.

“We are now asking Gov. Makinde to come clean on the amount of cash gifts from corporate organizations which he has used on the superfluous road and junction decorations in part of the state capital while we also urge him to be aware of the fact that the time for real governance is here as against the cosmetic approach which portrays him as still being in a campaign mood several months after his assumption of office,” the APC statement read.