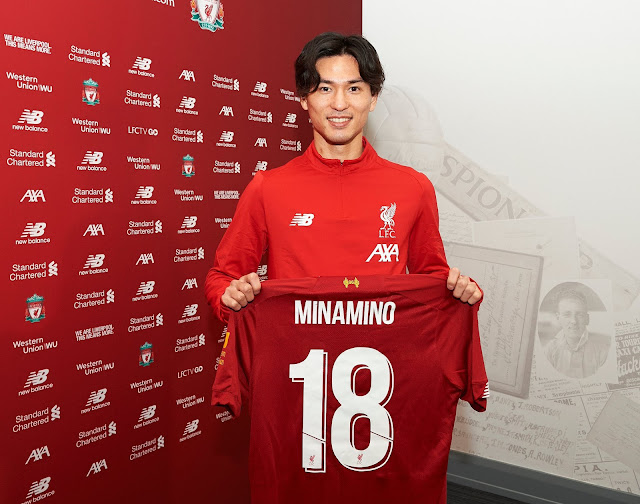 The Reds have warmly welcomed Takumi Minamino, hoping that the Red Bull Salzberg star has what it takes to put the pieces in place which will allow them to remain “addicted” to winning trophies. The Japan international forward is set to join the ranks at Anfield on January 1, with a £7.25 million ($10m) deal with Red Bull Salzburg having been wrapped up.


Although being placed next to star talents such as Mohamed Salah, Sadio Mane and Roberto Firmino, Adam Lallana considers him a great addition to the team claiming: "It's going to be more competition for places again, which is hugely positive to have. The more you're competing, the higher the level is in training. “It's fantastic news that we've made another addition and I'm really looking forward to meeting him when we get back".
Unfortunately for Manchester United, the Red Devils missed out on signing the Japanese talent. Ed Woodward, who leads Man United's transfer is business is coming under immense pressure as he failed to make a move signing Minamino. The Red Devils expected to pay huge money for the new Liverpool signing and as such were slow to move for the Japan international.
Minamino was a highly desired player by the Red Devils and had been tracking him ahead of the January window for some time now. He was definitely on their shortlist of potential transfer targets, however, Liverpool swooped in and paid the Japan international's £7.25 million ($9.6m) release clause, with United under the impression he would cost far more.
Keen to move on from this blunder, United are hoping to have two new signings that will be joining them following the turn of the year. Ole Solskjaer is desperately trying to restore even half of the glory that Manchester United had, hoping to bring new blood to give their game a fresh kick.
Luckily, the Red Devils will not be letting go of Paul Pogba anytime soon and for good reason. Danny Murphy, ex-Liverpool star, discusses how "Paul Pogba has always been one of the best midfielders in the Premier League. His ability has always been unquestionable. He is technically superb, he’s strong, he’s quick, he can score a goal and he can see a pass".
Ole Gunnar Solskjær has denied Paul Pogba will be sold in January, though Manchester United’s manager refused to offer details of the ankle injury that has ruled out the midfielder since late September. Pogba’s recovery has been hampered by a recent illness, Solskjær said this week, and the future of a player who stated in the summer he wanted “a fresh challenge” has again been the cause of speculation.
But with a discussion-closing, no nonsense statement like "“He’s not getting sold in January" by Solskjaer, fans can tell they're not ready to let go of Pogba yet.